Author Peter Longerich is a prominent German historian, professor of modern German history at the Royal Holloway College, University of London, and founder of the College’s Holocaust Research Center. From 2003 to 2004, he served as a senior scholar-in-residence at the United States Holocaust Memorial Museum in Washington, D.C.

Because Longerich has written biographies of leading Nazis Joseph Goebbels and Heinrich Himmler, it is no surprise that he finally turned his attention to Hitler himself. The result is a 968-page exploration of the Nazi leader with an additional 247 pages of notes and a 70-page bibliography.

Despite its length, Longerich’s book is no ornamental “door stopper;” it is, rather, an “eye opener” that sets this book apart from those of many other Hitler biographers.

Longerich rejects the view of historians and psychoanalysts who see the first 30 years of Hitler’s life as “preparation” for his becoming a tyrannical dictator, arguing that this interpretation “…reads purpose and linearity into Hitler’s development, when there is in fact no evidence for these (claims)…Hitler’s…later career…cannot be explained by the first three decades of his life. It is therefore important to resist later reinterpretations and exaggerations. Only then do we see clearly that what we are dealing with is no more or no less than the history of a nobody.”

In 1919, at the end of World War I, there were millions of disillusioned angry  “nobodies” who could not accept Germany’s military defeat and the postwar political chaos that followed.

One of these “nobodies” was Adolf Hitler, who spent years in Vienna as a homeless, failed artist. Despite his negative self-image, Hitler had grandiose plans for future greatness and he proved to be a gifted orator and cunning political organizer, first embracing and then leading a malignant wave of right-wing hatred in the postwar Weimar Republic.

A special target of Hitler and his followers were Jews, whom they falsely accused of being “responsible” for Germany’s national humiliation and shame. Hitler also railed against the alleged “Slavisization” of Austria, calling Vienna a “racially mixed Babylon.” And he loathed the role that Christianity and its non-Aryan Savior played in “Judaizing” and spiritually weakening the Herrenvolk, the world’s “Master Race.”

Central to Hitler’s hate-filled platform and dictatorial rise was his derision of what he called the “Jewified” German press and parliamentary democracy led by “boulevard politicians and intellectuals,” many of whom he charged were racially inferior “Asiatic Jews.”

Between 1919 and 1933, Hitler was able to manipulate the general public and control his supporters with a combination of physical violence and constant rhetorical warfare, replete with verbal vilification of all opponents. In time, Hitler became the personification of revenge, retribution, and retaliation for all of Germany’s supposed “hurts” and “shame.”

Longerich reminds readers that Hitler gained the German chancellorship legally in 1933, without ever having won a majority vote of approval from German voters.

Once in power, “Hitler…used exceptional skill to secure for himself…resources, both material and non-material, from the conservative establishment…[but then] he deliberately set out to destroy the very political system that brought him power.”

Hitler systematically demolished all the institutions, norms, standards, and laws that had previously governed German society. Hitler first destroyed the free press, which he proclaimed was controlled by Jews and Socialists. Next, he gained total control of existing civilian police forces and replaced them with his own “enforcers” – the Gestapo, the SS, and other organizations of terror.

The media, courts, universities, trade unions, medicine, sports, publishing, youth groups, and large elements within Protestant churches were bent to Hitler’s will. He neutralized the Catholic Church in Germany by entering into a concordat with the Vatican that severely weakened the Church’s once significant role in society. He shaped the nation’s armed forces to personally serve him. German soldiers swore absolute loyalty to the all-knowing omnipresent “Fuhrer,” who now controlled every sector of German life, and not to “Germany” or to the “Fatherland.”

Longerich asserts that, from the very start of Nazi rule, Hitler was personally behind the “War Against the Jews.” He writes: “There is no written record of the ‘decision’ to embark on this programme of deportations and murder… [but] Hitler provided the impulse and initiative and the backing and the confirmation for it…it was always he who set the agenda [for mass murder]…[other Nazi leaders] focused on …actual implementation, but the final responsibility lay with the ‘Fuhrer.’”

Longerich’s brilliant scholarship makes clear that Adolf Hitler – a nobody after World War I – was even more totally in control of Germany than many students of Nazism had previously thought: “The ‘Third Reich’ could not actually collapse…until the man who held it together finally took his own life.” 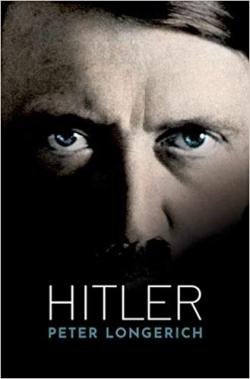