Nearly a century after his death, the name Harry Houdini still evokes in biographer Adam Begley’s words: a  “…spellbinding performer who carved out for himself a niche in show business history by escaping from every conceivable restraint and … mystify millions of people who still cannot solve the mystery of how he did it.”

The “it” was the extraordinary number of times that Houdini, in death defying feats, extricated himself from of a combination of body restraints, including straitjackets, handcuffs, metal chains, body manacles, and diving bells.

In Houdini: The Elusive American, Adam Begley, the former books editor for the New York Observer and a Guggenheim Fellow, tells the remarkable story of how a Hungarian-born rabbi’s son achieved global fame as the world’s greatest magician and the master of “self liberation.”

Ehrich Weiss, the son of Rabbi Mayer Samuel and Cecillia Weiss, was born in Budapest on March 24, 1874. The family immigrated to Appleton, Wisconsin four years later, where the rabbi became the leader of the community’s fifteen Jewish families, until he was fired after a clash with the synagogue president. The rabbi was considered “…too old and too attached to his Old World ways.”

Rabbi Weiss moved his poverty-stricken family to Milwaukee, where he worked as a mohel and kosher butcher before ultimately settling in New York City. He died of cancer at age sixty-three, leaving his widow with seven children, including her eighteen-year-old adoring Ehrich.

Young Ehrich, who was exceptionally strong, became a track star, boxer, swimmer, and exercise fanatic. To help support his family, he dropped out of high school, left home, and embarked on a career as a stage magician. “Show business would be his ticket out of poverty: he would become an entertainer.”

He adopted the professional name Harry Houdini, a tribute to the famous 19th-century French conjurer: Jean-Eugene Robert-Houdin. He added the letter “i” to add an exotic touch. Though only five feet four inches in height, Houdini “made issues of the body and of masculinity central to his art.”

He married Bess Rahner, a diminutive Roman Catholic woman, when they were both eighteen, and the couple performed magic acts together for many years.  He would regularly “saw” Bess in half, or make her “disappear” and then amazingly “reappear” on stage.

As his performances became increasingly spectacular, people came by the thousands to watch the Houdini’s death-defying feats, such as diving from bridges into rivers while wrapped in chains. One of his most famous and frightening acts was the “Water Torture” escape, which debuted in Berlin, shortly before World War I. Shackled and hanging upside down, Houdini was lowered into a tightly closed, water-filled metal “coffin.”  The curtain then closed, and the audience waited and waited, wondering if this would be his final act. Houdini emerged from the tank with “eyes bloodshot” and gasping for air, as the crowd cheered in amazement.

Houdini was often booed in by Jew haters on his European tours, especially in Russia. He performed in Kishinev, the scene of a murderous pogrom in 1903, and “saw firsthand traces of the bloody rampage. He had, of course, been exposed to anti-Semitism before, but not the implacably murderous variety. ‘I never was ashamed of to acknowledge that I was a Jew, and never will be…but it is awful what I hear from people that are Jew Haters…”

Begley describes the strange relationship between Houdini and British author Sir A. Conan Doyle, the creator of the Sherlock Holmes mysteries. Doyle was a true believer in “Spiritualism,” the movement that promises direct contact with the deceased through the use of mediums at séances.

Houdini rejected alleged contacts with the dead as fakery and became entangled in a public feud with Doyle. In July 1925, Houdini wrote in a Christian publication:

“Tell the people that all I am trying to do is save them from being tricked in their grief and sorrows, and to persuade them to leave Spiritualism and take up some genuine religion.”

Houdini’s enduring fame is reflected in Saul Bellow’s 1975 novel, Humboldt’s Gift, in which a character searches for a secret meaning in Harry’s life. He wonders whether Houdini “hadn’t had an intimation of the Holocaust and was working out ways to escape from the death camps. Ah! If only European Jewry had learned what he knew.”

Alas, Houdini died in 1926, seven years before Hitler gained power and the “elusive American” took his secrets of escape to the grave. 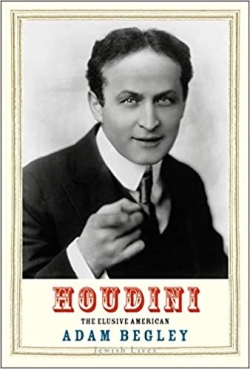