Even the fearless Gabriel Allon, Daniel Silva’s fictional Israeli intelligence agent, would be awestruck by the real life exploits of the Nazi-hunting husband and wife team of Beate and Serge Klarsfeld.

Hunting the Truth: Memoirs of Beate and Serge Klarsfeld (Farrar, Straus and Giroux, translated from the French by Sam Taylor) tells the inspiring story of how two people from very different backgrounds devoted themselves, beginning in the 1960s, to exposing war criminals who had escaped justice.

Beate Klarsfeld was born in Berlin in 1939. During World War II, her father served in the Wehrmacht (the unified armed forces of Nazi Germany). Serge was born in Bucharest, Romania, in 1935 and moved with his Jewish family to France a few years before the German occupation in 1940. As an 8-year-old living with his family in Nice, Serge and his sister barely escaped a roundup of Jews by the dreaded SS. His father was deported to Auschwitz, where he died.

Beate, a journalist, and Serge, a lawyer, met in Paris, married in 1963, and raised two children. For more than 50 years, the Klarsfelds have dedicated their lives to hunt, confront, and expose Nazi war criminals and other enemies of the Jewish people throughout the world, including Jean-Marie Le Pen, the French far-right National Front leader.

Serge and Beate tell us how they were inspired by the courage and legacy of twenty-one-year-old Sophie Scholl and her older brother Hans, members of the anti-Nazi “White Rose” movement.

Before their execution in 1944, Sophie and Hans wrote:

“Once the war is over, the guilty must be punished in the interests of the future, so that no one will ever want to do something like this again…Do not forget the bastards who run this regime. Remember their names, so that not one of them may escape. So they cannot, at the last moment, change sides and pretend that nothing ever happened.”

In 1971, the Klarsfelds tracked down Klaus Barbie, the sadistic Gestapo “Butcher of Lyon,” who during World War II was responsible for the deaths – often by ghoulish physical torture – of 14,000 people, including Jewish children. After the war, Barbie fled to South America, after working for both the West German and American intelligence services. The relentless efforts of the Klarsfelds led to Barbie’s extradition in 1983 from Bolivia to France, where, in a well-publicized trial, he was found guilty of war crimes and sentenced to life imprisonment.

Beate and Serge helped track down Paris Gestapo chief Kurt Lischka, who had deported thousands of Jews to their deaths. He was sentenced to a 10-year prison term in 1980. With the aid of their son, Arno, the couple also brought to justice the infamous Vichy French police chief Maurice Papon, who in 1998 was convicted of crimes against humanity.

While the Barbie case revealed the post war practice of using Nazis as Western anti-Communist intelligence agents, perhaps the Klarsfelds’ most spectacular episode involved their expose in 1968 of Kurt Georg Kiesinger, a high official in the Nazi Foreign Ministry’s Propaganda Office, who was chancellor of West Germany.

Beate used her journalist’s credentials to attend a public meeting in West Berlin that featured the chancellor. Once Beate was “up close and personal,” she slapped the chancellor’s left creek and yelled, “Nazi! Nazi!”

She was arrested, brought quickly to trial, and found guilty, but because Beate was a French citizen, she demanded to be tried under her country’s legal system. The German judicial authorities, sensing an ugly Franco-German public dispute, suspended her sentence, and Beate was released.

A year later, Willy Brandt was elected chancellor, ending Kiesinger’s career as a major political figure. Beate plays down her role in Kiesinger’s defeat; others believe the “slap that was heard around the world” was a major factor.

The Klarsfelds deserve an honored place in modern history.

Rabbi James A. Rudin is the American Jewish Committee’s senior interreligious adviser. His most recent book is Pillar of Fire: A Biography of Rabbi Stephen S. Wise. His website is jamesrudin.com.

By
Beate and Serge Klarsfeld
Rabbi A. James Rudin 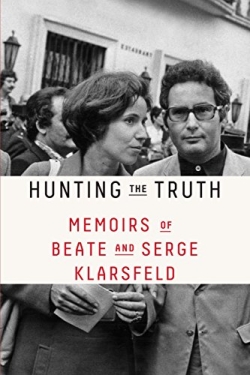