Book Review: I Named My Dog Pushkin (and Other Immigrant Tales): Notes from a Soviet Girl on Becoming an American Woman

Margarita Gokun Silver was 20 years old when she left her homeland, the former USSR, to live in the United States. She relates her experiences as a Jewish refugee in a series of darkly funny essays about life in the Soviet Union, family dynamics, and culture shock upon entering "Amerika," as Silver and her high school friends referred to the U.S.

While her plan was to become unrecognizable as a Russian, she was stymied from the get-go by unforeseen challenges in language, dress, and customs.

Silver's amiable, chatty writing style is punctuated by the frequent use of footnotes to amplify a point. She also likes using listicles, such as this one on the dos and don'ts of becoming a "fully fledged American":

Silver was an engineering major at the Moscow Institute of Oil and Gas when, after a year of steady cajoling, she finally convinced her parents and grandparents to leave Russia for the United States. It had been a hard sell. Landing in New Hampshire, where a community had agreed to sponsor the family, she set about becoming an American. First, she changes her name. That was the easy part.

She had had no idea how difficult becoming Americanized would be. From her vantage point, the United States was rife with conundrums.

She writes, "When you immigrate to the U.S. from behind the Iron Curtain, you ponder a lot of questions about America. Why are there no fences around these houses? I can see straight into their living room-don't they have curtains in this country? Cereal served with cold milk-what kind of soggy hell is that? This tomato has no taste-did it even come from the earth? Why do they call this game 'football' if they carry the ball instead of kick it? What is tuition? HOW MUCH?"

Silver gets into Yale, but never ceases to wonder why students have to pay to go to college; in Russia students are paid to attend university. She gets her diploma but has no idea what to do with it, much to the chagrin of her parents.

"To not disappoint a former Soviet Jewish parent," she writes, "you need to be a doctor, a lawyer, an investment banker, and a classical pianist of world acclaim-preferably all at the same time."

Silver pokes fun at Russian culture: Russian sex (there is none); Russian appetizers (virtually any ingredient on hand, slathered with mayonnaise), and Russian pregnancy ("how much of a bribe do you give to procure a pram, a crib, and a pacifier?").

Russian words (and their translations) are liberally sprinkled throughout the memoir, and there is even a glossary of the most frequently used words in the opening pages.

She marries, has a daughter, and ends up back in Russia due to her husband's employment. The next decades would take her around the world, but her rosy view of America stays intact. What she realizes, 30 years after landing in the States, is that the Russian-ness she had once tried so hard to free herself of is still a part of her in some ways, and she had to come to terms with that.

And at this stage of her career, as an essayist, novelist and artist, she is fully at peace with the notion that not every Russian Jewish child needs to aspire to become a doctor or a lawyer.

Margarita Gokun Silver's memoir (published by Thread, an imprint of Hachette) takes us on a fun ride, with the author as our sharp-witted tour guide. 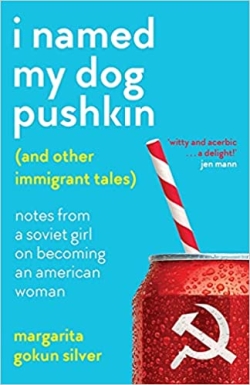