Fradl Shtok (1890-1990) was a Yiddish writer from Ukraine who has languished in obscurity. With this splendid collection of 23 of her stories (Northwestern University Press), she may now rightly be recognized as among the best Yiddish writers of her day.

Why isn't Fradl Shtok's work better known today? The editors state in their introduction: "Despite a recent surge of translation, many Yiddish women writers remain untranslated and thus unknown to American audiences…. While women's prose did appear in the pages of Yiddish periodicals, it was less likely to be anthologized in book form. Prose was the sphere for serious social criticism and intellectual authority, and it was thus considered the domain of male writers like Sholem Aleichem and I. L. Peretz or later David Bergelson, Sholem Asch, and the brothers Singer."

Fradl Shtok immigrated to New York City as a teen and soon gained popularity for her poetry. In 1919, she wrote a collection of short stories in Yiddish and in 1927 a novel in English. She battled mental illness in the 1930s and eventually disappeared from the literary scene. Little is known about the last years of her life.

Storyteller and social observer, Shtok wrote about what she knew best: the ebb and flow of shtetl life and later the immigrant experience in New York City. Her modernist perspective opens a refreshing window into the musings of young women coming of age, with themes of sexual awakening, escape from the bounds of a proscribed life, and dreams of freedom beyond the Galician shtetl.

In "The First Train," Shtok tells the story of how thrilled the townspeople are with the inaugural arrival of a train, opening new possibilities. "A desire to travel into the world came over them, to drift away with the vanishing smoke." When a German Jew, a Zionist, comes to town, Nessi, the demure 17-year-old daughter of the butcher, fantasizes about escaping with him on the train and seizes the opportunity.

In "The Daredevil," Shifra is distracted by a troupe of performers and flummoxed when one of them flirts with her. At the show, she watches his acrobatics with yearning desire. "Shifra nearly died from ecstasy."

In "Viburnum," a poor young woman named Reyzl craves viburnum berries and squanders her family's money when she impulsively purchases five bundles of the fruit. While in the marketplace, she notices the count's 18-year-old son and feels the urge to run after him. "Maybe he would fall in love with her and carry her off into the forest away from her poor home?"

In "Shorn Hair," a bittersweet story about Sheyndl, a widow rebuked by her friend for making a wig from her own plucked hair, Shtok describes how "Sheyndl walked back home crying. The day was so bright, which only caused her more pain."

In "The First Patient," about a novice dentist treating his first patient while his helicopter parents look on, Shtok writes, "The son grew talkative and cheerful, retelling the story of how it all happened. His parents drank in every word so proud of such a song. But when it came to the part where he yanked the tooth, his father jumped up, clapping his hands. 'That's my boy.'"

Shtok writes everyday stories about everyday people with nuance, pathos, and humor. She ends many of her stories without a resolution, leaving the interpretation up to the reader, a style I found quirky and delightful. Her work should be treasured by admirers of this genre. 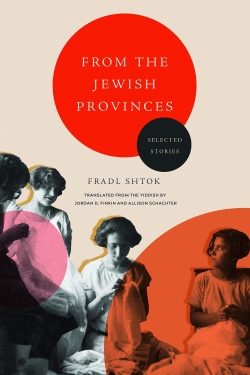