For many people, “Key West” conjures up a menagerie of Humphrey Bogart/Lauren Bacall films, home of Ernest Hemmingway, quirky residents and visitors, set in a hurricane-prone resort town adorned with beautiful sunsets.

Arlo Haskell’s The Jews of Key West: Smugglers, Cigar Makers, and Revolutionaries (Sand Paper Press) shows us another dimension of America’s southernmost island city in his skillful portrayal of its 195-year-old Jewish community.

The author, executive director of the Key West Literary Seminar, introduces us to a robust gallery of Jewish “conchs” (the affectionate name for Key West denizens), including sailors, religious leaders, smugglers, cigar makers, tavern owners, Cuban independence supporters, and activists who helped smuggle European Jewish refugees into the United States from nearby Cuba during the 1920s and 1930s.

Unlike the larger Jewish communities in Florida that emerged later, such as Miami, Fort Lauderdale, Boca Raton, Orlando, and Jacksonville, Key West’s Jews have lived in relative obscurity, largely due to its geography and severe weather. But, as Haskell shows us, its history has been historically consequential, largely because of its close proximity to Cuba, about 90 miles away.

In the 19th century, German Jews established large cigar factories in Key West, importing both tobacco and workers from Cuba. Beyond commercial ties, Key West Jews gained first-hand knowledge of and sympathy for the Cuban struggle for independence from Imperial Spain during the 1890s.

To understand Jewish support for Cuban independence, it must be remembered that the Spanish Inquisition continued to plague Jews in Spanish colonies until 1834.  Haskell writes:

“Like Jews in Russia or Romania, native-born Cubans were denied fundamental rights readily afforded to Spanish citizens…A shared hatred for the Spanish Empire led to deepening relationships between Cubans and the Jews of Key West.”

Haskell notes that the revered leader of the Cuban independence movement, journalist Jose Marti (1853-1895), had an “awareness of Jewish history” and “overt identification with Jewish themes.” Marti wrote in 1882, “These are grave times for the Jews of Russia” as the anti-Jewish “May Laws” of Tsar Alexander III began to be carried out.

In a sense, Marti’s efforts reflected the vision of another journalist activist, Theodor Herzl (1860-1904), who devoted his life to the creation of a Jewish state.

“We Cubans have no country but the one we must fight for.” Herzl could not have said it better. Both men died in their early 40s, before their dreams of independence for their people came true. Israel’s famous statesman, Abba Eban, would later observe that Herzl and Marti had “parallel lives.”

Another major chapter in the history of Key West’s Jews was their deep involvement in the rescue of European Jews kept from entering the U.S. after the rise of Adolf Hitler because of the highly restrictive US immigration quotas. A “loophole” in America’s immigration law, however, allowed “migrants who could establish Cuban residency by living on the island for a year… to bypass American quota restrictions and immigrate to the United States.” As a result, Cuba became a “stepping-stone” to American citizenship.

Key West’s Jews provided both financial and legal assistance to the often poverty stricken refugees during their 12-month mandatory stay in Cuba. Rabbi Lazarus Schulsinger, the leader of the Key West synagogue, played a major role in providing legal (and likely illegal means) that enabled Jewish refugees to enter the U.S.

The Jews of Key West is filled with many historic photos and other primary source material, including news clippings, letters, commercial records, and family memorabilia. And the beautifully printed book has excellent notes, an index, maps and a bibliography.

Arlo Haskell has given us a well-research and lively history of a small Jewish community that has played an outsized role on the world stage.

Cheers for the Jewish “conchs” of Key West! 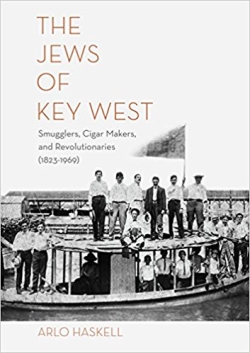