The name conjures up an intimidating bearded revolutionary intent on violently overthrowing society.

Karl Marx (1818-1883) was born in Trier, a region in Germany’s Rhineland under French rule, where Jews enjoyed the fruits of emancipation. Both of his grandfathers were rabbis. With Napoleon’s defeat, the repressive Congress of 1815 ceded control of Trier to Prussia. Under the new regime, Karl’s father, changed his name from Heschel to Heinrich and had his family converted to Lutheranism to gain a position in the Prussian civil service.

Marx  never practiced any form of Christianity, but his baptism permitted him to marry Jenny von Westphalen, daughter of an aristocratic German family. His in-laws, however, did not provide the couple and their three daughters with much financial support.

Although Marx had earned a Ph.D. degree at the University of Jena and wrote two famous works – Das Kapital and The Communist Manifesto – he was, in Avineri’s words, “a pauper.” Once, while living in London, Marx was forced to sell his overcoat to buy food for his family.

Financial help came from Marx’ intellectual soul mate, Friedrich Engels, a German Protestant whose family owned textile mills in Germany and Britain. Engels also collaborated with Marx in writing articles and books about the inevitability of abolishing private property and creating a workers’ society based on state ownership of all means of production.

According to Avineri, most English translations of  Marx’ writings (especially those published in the former Soviet Union) are inaccurate or as he terms it: “tendentious.” He therefore provides his own translations to show that Marx was no “Marxist.” He never led a political insurrection nor participated in a workers’ rebellion against bourgeois capitalist employers, and he never manned a barricade. His sole revolutionary activity was to edit a radical newspaper for a brief period in Germany until conservative political forces crushed the unsuccessful 1848-1849 revolution in Europe.  Marx was never involved again in direct revolutionary activity.

As a philosopher, influenced by Georg W. F. Hegel, Marx, through his continuing stream of radical articles, greatly affected revolutionary activists. Because European rulers considered Marx a threat to the existing political order, he moved his family to the safety of London in 1849. There he occupied most of his time reading books and writing revolutionary tracts in the British Museum Library. To support his family, he took the position of London correspondent for the New York Daily Tribune, founded by Horace Greeley.

Avineri corrects long held misconceptions about some of Marx’ most famous quotes, including the phrase, “Religion is the opiate of the people,” often cited as “proof” of Marx’ contempt of religion.

Actually, Marx perceived religion as a  “… moral sanction… a universal source of consolation… the protest against real suffering… the sigh of the oppressed creature, the heart of a heartless world… It is the opium of the people.”

Avineri writes:  “Marx expresses empathy, not scorn, for the suffering religious human being…opium may not be the medicine that puts an end to pain, but it certainly alleviates it and has to be accepted and respected…”

Despite Marx’ harsh written attacks upon Jews and their involvement with capitalism, Marx publicly called for their full emancipation: “…Jews and Christians are equal, but in practice Christians have a privilege over Jews…the Jew who demands freedom and nonetheless is not willing to give up his religion…is making a demand which does not contradict political freedom…”

He also wrote sympathetically about the plight of Jews in Jerusalem: “Nothing equals the misery and suffering of the Jews of Jerusalem, inhabiting the most filthy quarter of the town… (they are) constant objects of Mussulman (Muslim) oppression and intolerance, insulted by the Greeks (Eastern Orthodox Christians), persecuted by the Latins (Roman Catholics), and living only upon the scant alms transmitted by their European brethren…attracted to Jerusalem… to die on the very place where the redemption is to be expected.”

Avineri asserts that one cannot write history today without acknowledging “…the links between economic issues and political structures… law and literary studies stand on the shoulders of Marxian analysis…what Plato has been to classical philosophy, Marx is to modern studies in the humanities.”

Marx believed a workers’ revolution could take place only in a unified nation-state with a strong workers’ movement. He expected the first such revolution to take place in Germany or France, not in economically backward Tsarist Russia.

Marx died in London in 1883, 34 years before the Russian revolution. Engels said in his eulogy: “The greatest living thinker ceased to think.”

There were just 11 people at the funeral. 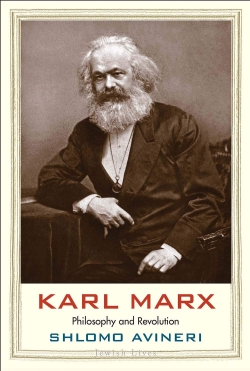