Award-winning novelist Anna Solomon’s second novel Leaving Lucy Pear, now out in paperback, is a masterfully woven web of ambition and lies. Her intriguing, not-quite-lovable characters climb over each other like monkeys in a barrel, looking for opportunities and masking their true identities to the last. While Lucy Pear functions superficially as a turn-of-the-century period piece, easily imagined as a Masterpiece production on PBS, its true artistry lies in its exploration of the ways in which people have eternally played with gender, sexuality, religion, ability, politics, and socioeconomic status for their own benefit – and often to the detriment of others.

The book begins in a pear orchard, where the wealthy, privileged, assimilated, unwed teenage Jewish mother of the eponymous Lucy Pear prepares to leave her in an orchard, hopeful that the Irish family, led by mother Emma Murphy, who regularly steals the pears will abscond with the infant. They do, and raise her as one of their own. As she approaches puberty and her physical dissimilarity to her siblings becomes more apparent, the attentions of her adoptive father become physically abusive. She hatches an elaborate plan to join an older sibling in Quebec, the machinations of which inadvertently connect her adoptive family to her birth mother and peel away at the protective masks she and others around her wear.

Beatrice Haven Cohn, Lucy’s mother, lives behind an especially impenetrable mask. Following her abandonment of Lucy Pear, she slips into a postpartum depression that leads to a lengthy institutionalization. Once recovered, more or less, she hides behind a sham marriage to Albert Cohn, who is hiding his homosexuality, and throws herself into work for the Women’s Christian Temperance Union, disseminating diaphragms to the working-class women of Gloucester.

She lives with and nurses her elderly uncle Ira, erecting another smokescreen behind which she can avoid a more robust social life. When an ambitious mayoral candidate, Josiah Story, seeks to curry political favor with Beatrice, and through her the Temperance ladies, he unknowingly hires Emma, with whom he is having an affair, to clean for Beatrice.

Beatrice and Emma each carry the burden of their immigrant past: Emma, known as Eimhear in her native Ireland, was put on a ship by her family to escape the famine, and Beatrice’s relatives changed their name from Hirsch to Haven to try to hide their Jewish roots. Beatrice’s mother especially tries to blend in to Boston Protestant society.

“On Saturday mornings, Lillian Haven played bridge at the Draper House on Commonwealth Avenue with the College Club. She went to be among the Protestant women, to maintain her place among them … Games worked against Lillian because she always wanted too badly to win and was never able to hide this, and so the other women trusted her, the sole Jew, even less than they would have.”

When her mother has a whistle buoy removed to calm Bea’s nerves, the resulting shipwreck leaves Emma’s husband and other sailors permanently disabled. Bea’s Judaism, which previously labeled her an outsider, becomes an excuse for the community’s vicious response. “The picketers had dispersed but venomous missives continued to arrive, accusing Bea of crimes ranging from attempted manslaughter and bribery to excessive wealth. … If she had been a Protestant, Ira thought, her fellow vacationers might have stood up for her. But she wasn’t. They didn’t.”

The contrast between the summer community, exemplified by Bea’s and Josiah’s position of wealth and privilege, and Gloucester’s fishing and quarrying families, like the Murphys, is depicted with a painterly touch.

Although the characters have strange, sometimes amoral motivations, the reader can’t help but root for the various threads to untangle, and for Bea, Emma, and Lucy to be allowed by themselves and society to fulfill their vast potential. With shifting points of view, a compelling tale of identities claimed and shed, and a knack for describing both posh and downtrodden coastal scenes, from the shore to the quarries, Solomon deftly weaves an intricate cats-cradle with the intertwined characters and stories in Leaving Lucy Pear. 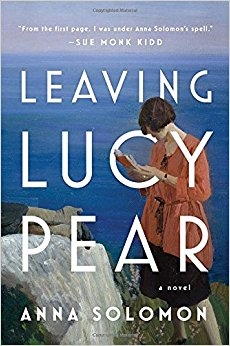