In Life in Culture: Selected Letters of Lionel Trilling (Farrar, Straus and Giroux), literary critic and poet Adam Kirsch presents us with a collection of 270 letters spanning the period from 1924 to 1975, the year of literary critic Lionel Trilling’s death at the age of 70. The letters are organized in chronological order rather than thematically, juxtaposing love letters to his wife Diana (an important literary critic in her own right) to discourses on his favorite British authors, to dealings with his psychoanalysts.

Trilling’s father was a tailor from Bialystok, Poland, and although Lionel’s mother was born in England and immigrated to the United States as a teenager, her family’s Jewish roots were also in Poland.

Lionel was born in Queens, N.Y., in 1905 and graduated from DeWitt Clinton High School in the Bronx. He entered Columbia University at age 16 when, as Trilling wrote 50 years later, the university was “pretty far along toward its Jewish coloration.” He earned both his undergraduate and Ph.D. degrees from Columbia and made history when he overcame embedded academic anti-Semitism to become the first Jew to gain professorial tenure in Columbia’s prestigious English department.

It was from that exalted perch that Trilling emerged as America’s most prominent literary critic and a celebrated “man of letters.” The Liberal Imagination (1950), Trilling’s 16-essay collection on the intersection of literature and society, became a bestseller.

Philip Roth, who was not a part of that group, described them as “…intellectually exceptional American sons of immigrant Jewish housepainters and butchers and garment workers who were…in their prime running Partisan Review and writing for Commentary and The New Leader and Dissent, irascible rivals sharply contentious with one another [with] Yiddish speaking- parents whose immigrant limitations …evoked ire and tenderness in equally crippling portions.”

Trilling published his earliest essays and stories in The Menorah Journal, an influential Jewish magazine from 1915-1930. His first article appeared in 1925 and described a college dormitory experience that presents a negative picture of Jewish life in New York City.

The letters in Kirsch’s collection emphasize Trilling’s alienation from the Jewish mainstream: “Most manifestations of organized Jewish life,” Trilling wrote in 1945 to Elliot Cohen, founding editor of Commentary, “do not please me. And most do not interest me.”

In 1947, Trilling opposed the creation of the academic institution that became Brandeis University, writing,

“I can understand such a movement, [but] I do not recommend it…so far as I can make out…there are now in America no special Jewish values of a large and important sort….Jewish life is dominated…by defensiveness and the problems of ‘adjustment’…”

Surprisingly, Kirsch’s collection provides no insight into what Trilling thought or felt about some of the most critical moments in Jewish history: Hitler’s rise to power in 1933; Kristallnacht in1938; the outbreak of World War II in 1939; the creation of the State of Israel in 1948; or the Six-Day War in 1967. We don’t know if this prolific letter-writer did not communicate his thoughts about those events or if Kirsch chose to omit them.

Trilling did not tolerate negative comments regarding his sense of Jewish belonging. In a 1961 letter, an irate Trilling took Commentary editor Clement Greenberg to task for having falsely “accused” him of “Jewish self-hatred.” He wrote, “I [am] as angry at you as I have ever been at anyone.”

The closest we come to Trilling’s characterization of his Jewish self-identification is a 1928 entry in his personal notebook: “Being a Jew is like walking in the wind or swimming: You are touched at all points and conscious everywhere.”

Trilling’s wrestling with his Jewishness may be one of the reasons he was drawn to Sigmund Freud, who had issues about religion and the role of Jews in Western civilization. Trilling underwent years of psychoanalysis.

For me, Lionel Trilling was unquestionably a pioneering Jewish academic patrician who blazed the way for many younger Jewish scholars to enter the once “sacred” halls of colleges and universities that previously had been closed to Jews.

In doing so, Trilling paid a high price. He eschewed a public Jewish persona, an action that caused him psychic and spiritual pain. His letters reveal both the world-class intellectual grandee and the troubled Jewish son of a Bialystok tailor.

View all posts by Rabbi A. James Rudin

By
Lionel Trilling with Adam Kirsch
Rabbi A. James Rudin 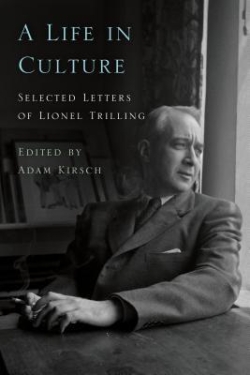