Book Review: The Light of Days: The Untold Story of Women Resistance Fighters in Hitler’s Ghettos

The Light of Days, a soaring and harrowing account of the role dozens of Jewish women played in the resistance during the Holocaust, is the product of many years of research, and a dose of bashert as well.

Judy Batalion had set out to write a story about strong Jewish women in World War II. She was familiar with just one: Hannah Senesh, the young Hungarian poet who joined the Hagenah Jewish underground and then enlisted in the British Women’s Auxiliary Air Force and was recruited as a paratrooper. Captured, tortured and executed by firing squad, Senesh is one of Israel’s most beloved heroes.

In the course of her research, Batalion stumbled upon a hard-back book with a tattered cover, published in 1946. Freuen in di Ghettos, Women in the Ghettos, was the title. Flipping through the worn pages, the author was astounded to find story after story about women warriors who played an important role in the resistance. Hannah Senesh was in there, but for the first 170 pages there were names Batalion had never known

The book was written in Yiddish. Amazingly, Batalion is fluent in Yiddish.

“I was raised on a day-to-day level by my grandmother,” Batalion explained, “who was a Holocaust survivor and spoke to me in Yiddish. Yiddish was actually my first language.”

Batalion also learned Yiddish in the Jewish day school she attended in her hometown of Montreal.

“Despite years of Jewish education,” she wrote in the introduction to the book, “I’d never read accounts like these, astonishing in their detail of the quotidian and extraordinary work of woman’s combat. I had no idea how many Jewish women were involved in the resistance effort, nor to what degree.”

As she got more deeply involved, she found many more tales in catalogues, archives, and published memoirs. of women in wartime leadership roles “It is very difficult material,” she said, “so it took me a long time to get myself to really immerse myself in this project. At the beginning, I was only working on it in little bits and pieces at a time because it was emotionally very difficult for me. Once I committed to expanding this story and to really doing the research – fortunately, I’ve been trained as a researcher and historian – I felt quite comfortable doing that kind of detective work.”

Known as kashariyot (Hebrew for “connectors”) or sometimes “ghetto girls,” these women were on the front line of a multitude of clandestine operations. They were instrumental in managing an underground network that helped find safe places for resistors, plan escape routes, and distribute forged IDs. They smuggled food, weapons, medical supplies, and messages. With nerves of steel, they developed expertise in using firearms and fashioning homemade weapons. Their ingenuity in outwitting the enemy saved Jewish lives and proved maddening to the Nazis, especially when they were able to infiltrate enemy territory in disguise.

How did they summon the courage to act as they did? “Some of it comes from the extreme situation they were in,” Batalion said. “We often act in surprising ways when we are in difficult or extreme situations. I also think that a lot of it has to do with their training and education, in particular in the youth movements and how they were taught to feel pride and pursue truth and feel part of a collective and a community. A lot of that training really inspired their actions in the war. They were also taught to be self-confident, to act, to think critically, to plot. The women talk about that being a major source of their strategy for confronting the war. I found that many of these women had strong instincts, they had gut feelings and they went with them They were actors and doers.”

It is likely the women believed that their purpose was to save lives and thwart the enemy, to maintain their sense of honor, and to not go quietly.

Who were some of these heroes?

Renia Kukielka, whose fluency in Polish and ability to remain impassive helped her masquerade as a Catholic peasant and ultimately become a skilled underground operative, “To live as a Jew on the Aryan side was a constant performance; a life-or-death acting job that required incessant high-level calculation and reassessment, alongside an animal instinct for danger, a basal sense for knowing whom to trust,” she wrote in a memoir.

Zivia Lubetkin, a leader in the Warsaw ghetto uprising, who was respected for her determination, leadership skills, and fierce devotion to the cause.

Tosia Altman, with her blond hair and calm steeliness, who was able to travel incognito from one ghetto to the next, spread the news of the atrocities she had witnessed and helped the underground make plans.

Batalion does not flinch from telling the truth, and The Light of Days is often difficult to read. And yet, one exults in the small but significant successes the women achieved against all odds. Their examples of courage add a dimension to our understanding of the Holocaust and serve to inspire and empower us.

What is next for Batalion? Right now, she is working on the screenplay of The Light of Days for producer Steven Spielberg. 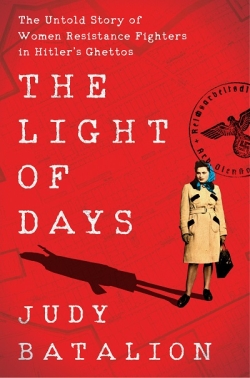