We meet Martin Helger as he teeters between childhood and adolescence. Socially, his family is one of the poorest in their upscale Jewish community. His friends tolerate him as a way of elevating their own status in comparison, and Martin languishes in the shadow of his high school sports superstar brother, Marcus, who has shocked the family by joining the South African Defense Force.

Martin is tormented by Holocaust nightmares, fueled by empathy for his live-in Zaydi. To cope, he plays a secret game called “Playing,” which has him pacing through the backyard, muttering stories in which he’s the hero, rather than the victim. His Jewishness gives him an element of privilege, but puts him at odds with Afrikaans authority figures, who regard him as “other.”

Martin is ripe for recruitment into the anti-Apartheid resistance. When his family hosts a young New Yorker, Annie Goldberg, who ostensibly comes to Johannesburg to teach in a segregated township school, he finds her allure irresistible. Snooping in her room, Martin discovers her secret affiliation with anti-Apartheid activists, and he is suddenly thrust into the harsh realities of 1980s South Africa, as he becomes irrevocably intertwined with her seemingly noble, some would say, terroristic activities. She is involved in copying and distributing videos that include instructions to make homemade explosives, and her strategic exploitation of Martin’s attraction to her soon has him using his school’s audiovisual equipment to advance the cause.

Annie shakes Martin out of his suburban ignorance of the daily terrors faced by township residents: “Get off this movie set you live in here in the suburbs, Martin, this fake California. Quit pretending you’re not in Africa. You’re living inside a movie, my man.” “Oh ja? What’s it called, the movie?” “Whiteland,” she says, not grinning with me.

From here, The Mandela Plot accelerates into overdrive. Even as Martin’s focus turns to the anti-Apartheid struggle, his social woes at school continue to escalate. A relentless villain pursues Martin, Annie, and Martin’s parents in vengeful fury to settle an old score. Bodies pile up as Martin is cast further and further into the conflict and away from any semblance of a normal life.

Kenneth Bonert’s storytelling builds up so much momentum that his plot is hurled off a cliff at what at first seems to be the book’s climax. As the story jumps six years into the future, Mandela is now out of prison, and Martin’s past choices put Mandela’s life in danger and threaten to change history. The author’s choice tips The Mandela Plot from thriller to near fantasy but doesn’t detract from the harrowing and compelling nature of the novel. Jewish action heroes are hard to come by, and it’s refreshing to read a story with Jewish protagonists engaged in a political struggle outside of Europe or Israel.

The Mandela Plot is so wrapped up in Martin Helger’s transformation from scapegoat to superhero that it relies lazily on old archetypes for other characters. Bonert’s women are either maternal or desirable, and black South Africans appear only as revolutionaries or servants. Annie Goldberg is introduced as a body first: "Coming toward me is a full-grown woman, a serious beauty. She has that Middle Eastern look of black curly hair and olive skin with plump red lips. She’s got big round ones under her tight T-shirt and her hips are wide in those green knickerbockers and I see an ankle chain above open shoes with glittery straps and giant cork soles. She’s got a rucksack on her back and a suitcase in each hand. It’s December 1988 and, God almighty, I cannot believe my luck."

At times it’s as though the entire story exists as part of Martin’s “Playing,” an adolescent fantasy devoid of character development outside of the protagonist. Regardless, The Mandela Plot is worth spending time with. Like Total Recall or any of the Jason Bourne series, its unlikely plot twists are entertaining and the historical context is a timely reminder of just how recently Apartheid was the law of the land in South Africa. 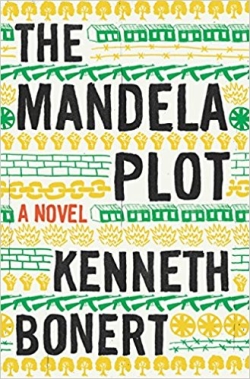