Book Review: Married to the Rabbi: Sixty Spouses of Retired Reform Rabbis in their Own Words

In 60 essays collected throughout a five-year period by the National Association of Retired Reform Rabbis, rabbis’ spouses share memories and insights about their lives. The pieces vary in length, tone, and writing style, even including poetry – but all add to the fascinating discussion.

Except for the one male contribution (set after 1972, when women were first ordained as Reform rabbis), these memoirs were written by women whose spouses are either retired or deceased. Anyone who grew up in this time and under these conditions will respond to the memories these women share – and those who cannot relate will still surely find them fascinating.

The essays in Married to the Rabbi: Sixty Spouses of Retired Reform Rabbis in Their Own Words portray a certain time period of American Reform Judaism preceding or at the start of the feminist movement, both Jewish and at-large. Therefore, most of the writers adhered – willingly or grudgingly – to “traditional” supportive roles of the 1950s, ’60s and ’70s, their own career ambitions and life trajectories put on the back burner or abandoned to support their husbands’ professional journeys.

When asked to contribute their stories, many used the opportunity to reflect deeply on their lives and marriages. Some composed life histories to pass on and transmit their personal values, in a manner similar to writing ethical wills.

One of the most moving examples is the condensation of a 69-page memoir written by Joan Maag Karff, an accomplished dancer, after she was diagnosed with ovarian cancer that took her life in 2016. She wrote:

“Most important of all, treat those closest to you with respect and love…be sure that your intimate relationships are built on solid friendships and very tangible affection…for in the end, love is the sustaining force of a life.”

Karff is only one example of the outstanding women whose voices we hear in this collection. Overall, I was astounded by their brilliance and accomplishments.

Many pursued their own educations and careers even before the second wave of feminism paved the way, often facing disapproval from congregants (including other women) who accused them of not conforming to the esteemed role of “Rebbetzin.”

They carved careers as college professors, social workers, teachers, historians, writers, dancers, and visual artists. One contributor, Ann Folb, became a rabbi herself in 2007 after her husband died; I believe other contributors would have done the same had they had the same opportunity as their husbands.

We are all familiar with the difficulties rabbis face with their congregations and with the stress they and their families experience. Explains Janice Rothschild Blumberg, who fought for civil rights in the American south with her husband:

“Developing a thick skin was a primary requisite for my rebbetzinhood. I could not have survived without it. Rabbis’ wives come in all shapes, sizes, and personalities…

“As a result, they shadowed – and in some cases overshadowed – their husbands as unpaid usually unappreciated assistants. Others reject all vestiges of the role. It’s no life for the faint-hearted. To survive the loneliness, the spotlight and the slings and arrows of outrageous circumstances, one needs, above all, a good sense of humor.”

Most of the contributors, though, focus on positive aspects of their roles and lives. Many give beautiful testimonies to happiness and fulfillment, expressing thanks for the meaning they found in their lives because of their husbands’ choice. Lynn C. Stahl writes:

“As I reflect upon my life as a rabbi’s spouse, I am fully aware of how blessed I have been. I love connecting with people. I love the spirituality of religious services. I love learning about others from their sharing of their experiences with me…

“This marriage that I somehow fell into seems to have been divinely ordained. I am, indeed, a most fortunate woman. Thus, each morning, I can gratefully affirm the words of our prayer book: Ashreinu, mah tov hel’keinu, ‘Happy are we; how good is our portion in life.’”

Times have changed, and it is now accepted for women to pursue their own careers and independent lives. These days, half of all Reform rabbis and rabbinical students are women – which means their partners will surely experience far different expectations from those described in this collection. (The book’s one male contributor, Dr. Jerry Golden, asserts that none of his wife’s congregants expected anything from him regarding a spousal role in synagogue activities.)

I highly recommend this enjoyable and educational collection to everyone of all genders, religious backgrounds, and ages. What began simply as a project to be given to the American Jewish Archives at Hebrew Union College in Cincinnati has now been hailed as a valuable contribution to historical documentation of this time period. This volume is indeed an historical document to be read and treasured. 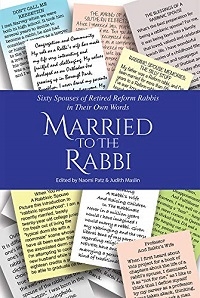