In Mavericks, Mystics & False Messiahs: Episodes from the Margins of Jewish History, Pini Dunner provides a series of bizarre stories describing how some Jews crashed through conventional guardrails of staid Jewish tradition and sped forward onto aberrant lanes of false messiahs, forgers of Passover Haggadot, rabbis searching for subversive religious meanings of Hebrew amulets, and an 18th-century British lord who converted to Judaism. Best of all, there is the raffish tale of a 20th-century Jewish con man who makes all other imposters in history look like amateur frauds.

Dunner, an Orthodox rabbi who leads a Beverly Hills, California, congregation, combines an expertise in ancient Hebrew manuscripts with a command of rabbinic texts and Jewish history to bring his band of Jewish miscreants to life.

Heading Dunner’s list is the infamous Shabbatai Tzvi (1626-1676). Born in Turkey, Shabbatai attracted a large number of Jewish followers who fervently believed he was the long awaited Messiah. Dunner writes:

“…he [Shabbatai]  was …joyful, exuberant, and ecstatic, while at other times he was depressed, anxious, paranoid, and passive…symptoms of acute manic depression, or bipolar syndrome…To [his] detractors his behavior was evidence he was an evil madman. To his supporters… his strange behavior attested to the fact that he was divine and a holy man.”

On May 31, 1665 Shabbatai publicly declared he was the “King of the Jews” and the “Redeemer” of Israel. His followers were delirious with joy, especially because Shabbatai Tzvi had repudiated much of the rigorous religious and moral laws of Judaism and encouraged wild sexual excesses.

A personal note: For more than 40 years, my wife Marcia and I have been active in the contemporary counter-cult movement, a global interdisciplinary network of academicians, professionals, former cult members, and families who educate the public about social-psychological influence and control, authoritarianism, and zealotry in cultic groups, alternative movements, and other similar psychological environments. It also provides recovery services for ex-cult members. Shabbatai’s apocalyptic messianic claims, his contempt for traditional norms and standards, and his unconventional values represent the basic behavior patterns of authoritarian cult leaders.

When Shabbatai was brought before the Sultan of the Ottoman Empire in Istanbul and asked to perform a miracle to prove his claims, the “Messiah” demurred, and when confronted with imminent execution for being a “dangerous revolutionary,” Shabbatai Tzvi saved his neck by quickly converting to Islam and even spitting on his head covering.

Though shattered by his actions, his most faithful followers perceived a mysterious divine plan in their leader’s instant conversion. As a result, “Sabbateanism” remained embedded among numerous Jews for decades.

Alarmed by the persistent presence of “secret” supporters of the failed Messiah, the famous Rabbi Jacob Emden (1697-1776) engaged in a bitter 25-year public campaign against Rabbi Jonathan Eybeschutz (1690-1764), Hamburg’s chief rabbi. Emden, a native of that region of Germany, alleged that Eybeschutz was a secret Sabbatean, intent on destroying traditional Judaism from within.

Because Emden and Eybeschutz were “heavyweight” rabbinic scholars, their acrid personal conflict forced other prominent rabbis to choose sides in the sordid slugfest that included excommunication, expulsions, and a vitriolic torrent of letters, texts, messages, and sermons that focused on a single question: Did Eybeschutz’ handwritten amulets conceal hidden messages that revealed his clandestine support for Sabbateanism? Eybeschutz always denied such a connection, but Emden was convinced the chief rabbi was lying.

Rabbi Dunner devotes nearly 30 percent of his 208-page book to this clash of Jewish titans. The battle, which ultimately involved the king of Denmark, ended “in a stalemate” and was never fully resolved. But Rabbi Dunner gives the reader a blow-by-blow ringside seat as two super-star rabbis of their era battled one another.

Finally, there is Ignatius Timotheus Emanuel Trebitsch-Lincoln, who was born in Hungary in 1879 and at his brit milah given the name Abraham Schwarz. During his implausible life as a huckster and con man, Trebitsch-Lincoln was a Protestant missionary, an Anglican priest, a Liberal Party member of the British Parliament, an activist in post- World War I right-wing German politics, a spy for Germany in both world wars (and maybe for Britain as well), the powerful private secretary to an English candy baron, and an escapee from a Brooklyn jail. In 1931, he became a Buddhist monk who lived out the last dozen years of his life in China as a charismatic cult leader/false messiah with yet another name: Chau Kung.

During their war with China, the Japanese conferred the title of Dali Lama upon the erstwhile Hungarian Jew. When one of his Jewish followers had an audience with Abbot Chau Kung (aka Trebitsch-Lincoln), he asked her: “What language would you like to use for this interview? English, German, or Yiddish?” And he spoke at least four more.

We can thank Rabbi Pini Dunner for keeping alive the memory of Ignatius Timotheus Emanuel Trebitsch-Lincoln, who died in Shanghai at the age of 64, as the ultimate Jewish maverick of modern times. 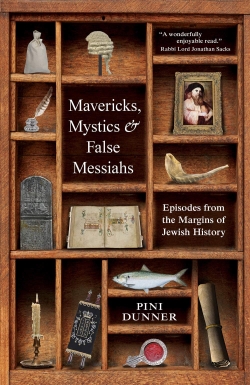