Book Review: Not By Might: Channeling the Power of Faith to End Gun Violence Book Preview

These have been some dark and depressing days for America: a massacre in Orlando targeting the LGBTQ community, people of color being shot by the police at an alarming rate, the gruesome murder of police officers in Dallas and Baton Rouge. We see flags at half-mast and do not know for which tragedy they have been lowered. There have been so many and our hearts wrench in pain and despair.

The traditional Jewish liturgy ends each service with an audacious call, “al tira mi’pahad pitom,” “Do not fear the suddenness of terror.” How is that possible? In the midst of a terror of death and devastation, of families gripped in mourning, and of a country reeling with assault, how can we not feel the fear of it all?

The common English translation of the prayer “Do not fear the suddenness of terror” does not fully convey the intention of the Hebrew words. Indeed, a closer translation might be “Do not be in awe of the anxiety of the sudden.” I think this means that the overwhelming feeling of awe can paralyze us from action. For example, the first time we experience the grandeur of Niagara Falls, we stand, mouth agape, at the wonder of nature. The first time a tourist visits Times Square, he stands frozen, taking in the sheer enormity of the place. So too, can negative things that come upon us suddenly, without warning, produce real anxiety and a feeling of helplessness.

The ancient rabbis, in concluding services with this bold call to not be “in awe of the anxiety of the sudden,” teach us that if we can steady our resolve, we can overcome the insurmountable.

Rabbis Against Gun Violence, a grassroots group of rabbis from across the denominational spectrum, have produced a rapid-response book, Not By Might: Channeling the Power of Faith to End Gun Violence, in the wake of the massacre in Orlando. Rabbis and teachers from every walk of life and all over the country produced stirring words of inspiration, guidance, and teachings from the Torah and Jewish tradition, to awaken us to real action. I was privileged to write a chapter about work I did around gun policy reform in Chicago.

Through this work, I was exposed to two Americas. There is the America that despairs over the ever-increasing violence of mass shootings in our public spaces, and then there is the “other America,” the one that lives with daily, never-ceasing gun violence in their neighborhoods. The latter is an impoverished America where kids go to underfunded and failing schools, do not have the chance to dream, and have easy access to guns.

In my chapter, I tried to bridge the understanding between these two realities. I believe that shared purpose and common cause can create a powerful alliance to work towards real reform that may also help close the seams between these two Americas.

Not By Might: Channeling the Power of Faith to End Gun Violence is now available on Amazon, and all proceeds go towards supporting the work of Rabbis Against Gun Violence.

Rabbi Ben Greenberg is the Director of Adult Engagement at Central Synagogue in New York City. 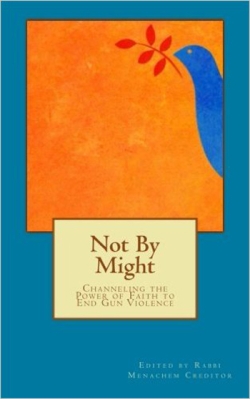