In Pain (Other Press) gifted writer Zeruya Shalev explores human pain amid heightened emotional awareness as the protagonist Iris finds herself in a second-chance love affair in middle age.

The story begins with Iris visiting a pain management clinic on the 10th anniversary of a suicide bomber terrorist attack in Jerusalem in which she was wounded. Her physical pain from the attack has returned and she is seeking relief.

Coincidentally, the prominent pain management physician who treats her, Eitan, was her first love and had abruptly ended their relationship nearly 30 years earlier, when they were 17 years old.

Already emotionally scarred from the loss of her father at age 4, young Iris had suffered a serious mental breakdown after Eitan rejected her. She did not speak, eat, or leave her bed for weeks.

In their first clinic encounter, Eitan pretends not to recognize Iris because she is accompanied by her husband. When Iris returns to the clinic alone to contact him, he asks her to wait for him in another room:

Their love is rekindled and a passionate love affair ensues. But the joy Iris feels from her emotional and physical awakening is curbed by the fact that she is married to Mickey, albeit not very happily, and is the mother of their two nearly-grown children:

She is no longer a teenager in love, she is a busy woman with a full life, almost too full, her cell phone is overflowing with messages, her mailbox is flooded with emails she doesn’t even have time to read…

Iris faces a painful choice as Eitan pleads with her to leave her family for him. Her dilemma is captured in a single word that she assigns to Eitan‘s contact information in her cell phone – pain. Whenever he telephones or texts her, that word flashes on her phone, reminding her of her dilemma: Be a dutiful wife and mother, or leave them behind for the promise of a renewed bliss with her first love.

Eitan has less to lose. He is twice divorced and sees his children from both marriages only occasionally. He lives alone and has few restraints in conducting his affair with Iris.

What seems to be a simple choice for Eitan burdens Iris with many questions.

Is their youthful relationship really still alive or even relevant after so many years? Should she follow her selfish desires or fulfill her obligations to family? Should she grab a second chance for happiness at the expense of hurting those she loves? Can she truly get a second chance to reframe her life? Can she ever free herself from the past? Can she seek the ideal life or must she adhere to her real life?  Is there even the possibility of an ideal, more fulfilling life, or is that just an illusion?

While still on the fence about Eitan, Iris faces a family crisis. Her daughter Alma, who works in a Tel Aviv restaurant, appears to be caught up in a cult headed by her boss. Iris knows there are experts she can turn to for help, but feels that she herself must rescue her daughter, with whom she has always had a difficult relationship. And she feels guilty about possibly having contributed to Alma’s susceptibility to mind manipulation because she’s never given her the full attention she needed.

Unlike most novels by Israeli authors I have read, this plot is not a veiled treatise about Israeli life and/or the country’s relations with its neighbors. It is a highly personal story. (Shalev herself was wounded in a terrorist attack.) The novel’s plot has many twists and turns and the characters are vividly complex and well developed. There are no stereotypic good or bad people, and no clear-cut good or bad alternatives or options for Iris and Eitan – or for the novel’s other characters.

With her skillful writing, Shalev adeptly explores Iris’ complicated inner and outer lives as the character wrestles with choosing the right path. In Pain, Shalev has created a highly thought-provoking and rewarding reading experience. 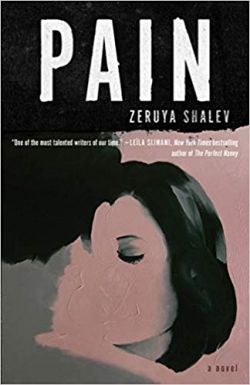