There are two groups that I think will benefit from Parenting on a Prayer (Ben Yehuda Press, 2020): those of us who are worried that we may not be raising children in the way that we should and those of us who have no idea how the Jewish prayer book can possibly speak to the challenges of parenting and all of the other issues that we face in life.

As I read Rabbi Amy Grossblatt Pessah's book, which explores the parenting insights contained within the Jewish prayer book, I found myself surprised and enlightened by the truths that she has found in its ancient words and by the way in which she uses these words to help us understand the art of parenting in our time.

One of those insights came to the author when one of her children got eyeglasses for the first time. As they were driving to school the next day, her daughter looked out of the window and exclaimed, “Wow! Is this what the world looks like? How wonderful!” That was when the author first understood the broader meaning of the morning prayer in which we "thank God for opening the eyes of the blind."

The author also describes a wonderful parenting lesson from the words we sing from the prayer book: “Mi chamocha ba’elim Adonai, Mi kamocha ne'dar bakodesh” (“Who is like You, among those that are worshipped. Who is like You, so majestic in holiness.”) This is the song that the Israelites sang when the sea split and they were able cross to safety, as Pharaoh’s army pursued them.

What do we learn from this? In the first line, the word is pronounced “chamocha” and in the second line it is pronounced “kamocha.” A modern-day teaching gives the following interpretation for this difference: Nachshon ben Aminadav was the first one who had the courage to leap into the sea as all the other Israelites stood on the shore, caught between the sea and the Egyptians closing in on them.

As Nachshon made his way further and further into the sea, singing God’s praises as he went, water came all the way up to his throat, causing him to gag. And that is why in the first line the word came out as the guttural sounding “chamocha.” When the sea finally split and the waters retreated, he was able to sing out “kamocha” in a clear and triumphant voice. This image of Nachshon choking on his words, yet continuing to move forward until the waters finally receded, enables us to see him as a true man of faith – but what does it have to do with parenting?

An essential part of parenting, Rabbi Grossblatt Pessah says, is teaching our children how to have the confidence to take the first step and not to stand back when confronted with a difficult task. Don’t wait for someone else to take the lead or to make excuses about why the task cannot be done, as the Israelites did when they stood paralyzed by fear at the edge of the sea. There is no other way to help children face a challenge than to let them take the lead.

As an example, Rabbi Grossblatt Pessah tells us the story of how several years ago, two of her children went through a phase when all they wanted to do all day was make Pearler beads of various shapes into coasters. As the coasters piled up, they got the idea of setting up a booth at their synagogue’s annual talent show and selling them for a quarter each. They made a $40 profit, and, after donating $8 to the synagogue, they had $16 each. This was probably the first serious money that they had ever earned, so they were feeling very good about themselves.

After the talent show, Rabbi Grossblatt Pessah took her daughter out for pizza to celebrate. As they were waiting to be served, one of her daughters noticed a March of Dimes poster on the wall portraying several sick babies and the words, “Every single quarter makes a difference.” Without asking her mother’s advice or permission, the girl reached into her bag and took out half a dozen of her newly earned quarters and placed them slowly, one by one, inside the March of Dimes box that was on the counter. Because this money came from her own efforts and was not a gift from her parents, she had the right to give it to whomever and whenever she wanted.

Her mother did not say anything at the moment, but proudly realized that her daughter had reached a milestone in her life. She was now capable of deciding what she wanted to do with her own money, and she was deciding to use some of it for a good deed. With this gift, she had learned how to take the first step. She had experienced empowerment. It was a Nachshon moment for them both.

The learning moment for the mother was holding back and not telling her daughter what to do. For the daughter, it was taking the step of doing what she wanted with her own money. For her, as for Nachshon, it was a moment when no one controlled her action, when the waters of doubt and hesitation split for her, and she was able to go marching through.

The book addresses many questions that every parent and other authority figures in a child’s life face at some time: What do you say to your children when you or they have done something wrong?  How do you convey to your child what God means to you?

I invite you to read this book, both for what it will teach you about the deeper meaning of the words of the prayer book, but even more, for what it teaches us about parenting. 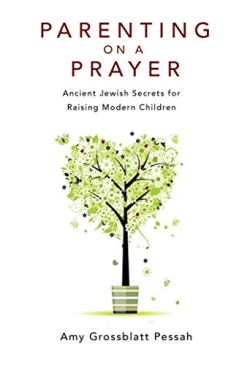