I am approaching my fiftieth wedding anniversary, but I have vague memories from my long-ago youth of what it’s like to fall in love at first sight.

Such experiences did not end well for me; neither does the affair portrayed in the story The Parting Gift (Other Press), written by Evan Fallenberg, an Ohio-born writer who now lives in Israel.

I use the word “story” deliberately because as we read this remarkable novel, we feel as if we are sitting around a campfire listening to a tale beginning with the words, “It was a dark and stormy night…” From the first sentence, we are drawn into the narrator’s life, hanging onto his every word as we cheer him on to tell us what happens next.

The narrator, unnamed à la Daphne du Maurier’s Rebecca, uses an intimate first-person voice to address a friend to whom he is composing a letter, but we feel he is speaking directly to us. The connection we feel toward the storyteller is all the more surprising because The Parting Gift is an epistolary novel (told via a letter or letters), a technique rarely used today because it can be awkward and emotionally distancing. Here, though, it serves to make the story more immediate, partly because the storyteller asks us to sympathize with and condone his behavior, while urging us to probe our own emotions and actions.

The narrator wants Adam, an old friend from his college days, to whom he is writing the letter – and the reader – to understand the events that led him to his sleeping on Adam’s couch for nearly four months after his sudden return to the United States from Israel. He tells us he moved to Israel after leaving his graduate school program suddenly “under highly unpleasant circumstances.” Unsure of his future plans, he enrolls in a Tel Aviv ulpan (Hebrew language course). On a weekend jaunt to the Galilee, he and his friends stop at the farm stand of an Israeli, Uzi, widely known as “The Spice Guy.”

While he and his friends gather rare spices in their baskets, the narrator comes across Uzi alone in a storage room. One look, and he is immediately in love. As he and Uzi return to his friends, who are ready to pay for their purchases, he tells them to return without him. “I am staying,” he informs them.

“Uzi looked up from the register, as if noticing me for the first time. I looked him straight in the eye and said it again, softer this time, to him only. ‘I’m staying.’”

A few moments later, he and Uzi consummate their relationship, without a word. The narrator moves in with the farmer and gives his entire life over to him. He is sexually obsessed:

“I was drugged. I left my Hebrew classes, in fact I could barely get myself back to Tel Aviv long enough to fetch my belongings…I left my friends… I had little interest in food or exercise, none at all in television unless it was watching a movie with him between lovemaking sessions. I was intoxicated…I had done some drugs before but never lost control; this was worse and better than all of them. I milked him dry. I milked myself dry.”

Without receiving monetary compensation, he helps with the spice business and even in developing plans for its expansion. He becomes involved in the lives of Uzi’s two ex-wives and five children, especially one ex-wife and her three children who live nearby. He is deliriously happy.

It is at this point that the reader begins to suspect him of being what is known in literary criticism as “an unreliable narrator.” And yet, even as his unsavory qualities come to the fore, we can’t help but sympathize with the protagonist.

I generally read novels before bed, but I do not recommend reading The Parting Gift that way. First of all, you will have trouble putting it down – and you will be so engrossed in the story and its disturbing events and themes that you won’t be able to sleep. And finally, Fallenberg’s writing is so wonderful that you will want to be at your best – so you can savor every word. 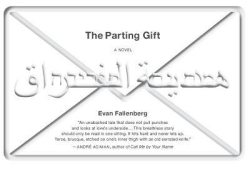