Martin Fletcher, the former NBC bureau chief in Israel, describes his 409-page novel in three words: “Exodus meets ‘Dallas.’” And indeed it is.

Instead of focusing on contemporary Israel, Fletcher goes back to the years between 1948 and 1967, a period in which the Jewish state more than tripled its population from about 800,000 to 2.7 million.

Promised Land: A Novel of Israel spans the two dangerous decades when Israel, frequently alone on the world stage, confronted extraordinary military, cultural, political, and economic challenges. It was an era that began with Israeli independence and ended with the Six-Day War.

Like many authors of ambitious sweeping historical novels, Fletcher focuses on members of a single family to tell the dramatic story of how Israel absorbed hundreds of thousands of immigrants, mainly traumatized Holocaust survivors and Sephardic Jews from Muslim countries.

During these years of immigrant absorption, Israel faced continuing deadly fedayeen guerilla attacks from its hostile neighbors, the emergence of the Palestine Liberation Organization, and threats of annihilation from Nasser-led Egypt, which sheltered Nazi German rocket scientists intent on their genocidal goal of the “Final Solution of the Jewish Question.”

Fletcher’s main protagonists are two Jewish brothers from Germany, Peter and Aren Berg. In 1937, 14-year-old Peter gains permission to enter the United States and finds a haven with a Wisconsin Christian family. But Aren, two years younger, falls victim to America’s closed-door immigration policy and must remain in Germany with his sister and parents. All four are later deported to Auschwitz. Only Aren survives.

After the war, the brothers are reunited in Israel; they change their last name to Nesher (Hebrew for “eagle”) and fight in Israel’s War of Independence. Peter retains his first name, but Aren becomes Arie (“lion”).

To drive the story, Fletcher draws upon another long literary tradition by embroiling the Nesher brothers in a conflict. Think of Cain and Abel or Jacob and Esau in the Bible and John Steinbeck’s two brothers in East of Eden.

Peter Nesher joins the Mossad, Israel’s renowned intelligence agency, and rises through the ranks. Fletcher’s choice of Peter may be in homage to Peter Malkin, a leading Mossad agent who in 1960 seized Adolf Eichmann in Argentina.

Arie, who served as a tank commander during the 1956 Suez Campaign and again in the Six-Day War, becomes a ruthless business executive – real estate, construction, automobiles – and one of Israel’s richest men. He marries Tamara, a Sephardic woman from Cairo.

Tamara and Peter are in love, but both are married, and they only become lovers after Peter’s wife conveniently dies.

Tamara finds herself caught between her rich philandering husband, who has built her a huge luxurious house in seaside Herzliya, and her often-absent Mossad lover, who is content with a modest Tel Aviv apartment.

At the end of the book, these and other entanglements are resolved, though in surprising ways.

Fletcher, who was born in London in 1947 to Austrian Jews who had fled to Britain to escape the Nazis, wrote Promised Land: A Novel of Israel as the first in a proposed trilogy about Israel, a subject he knows well. For his gripping and insightful descriptions of the Mossad’s inner workings he credits a former agent, 93-year-old Rafi Eitan.

Fletcher’s poignant description of Israeli casualties following the 1967 conflict is a bitter reminder that there are no easy battles and no glorious wars. The human price is always catastrophic, even in the midst of a spectacular military triumph.

“Dallas” introduced us to the complicated Ewing family, and Martin Fletcher has given us the equally complicated Israeli variety – the Nesher family. 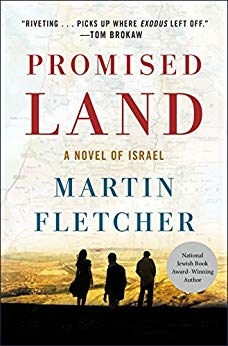