Book Review: Sacred Trash: The Lost and Found World of the Cairo Geniza

While Europe in the Middle Ages was characterized by an agrarian feudal economy, in the same period, the mostly Muslim-controlled lands surrounding the Mediterranean thrived on trade—from Spain to North Africa, Palestine, Persia, Yemen, and India. Ninety percent of the world’s Jews lived in Mediterranean communities, keeping in touch with each other and playing an active part in this maritime trade, whose hub was Fustat, the oldest part of Cairo. All this goes to explain why the late 19th-century discovery of the Cairo Geniza—an attic room filled with documents in the Ben Ezra Synagogue—excited generations of historians for over a century. The story of medieval Jewry largely took place here—leaving footprints in “ten centuries’ worth of one Middle Eastern Jewish community’s detritus,” according to Jerusalem-based authors Adina Hoffman and Peter Cole.

“Treasure” and “trash” are indeed in the eyes of the beholder, as Hoffman and Cole dramatically show us in their history of Geniza scholarship. Rabbi Solomon Schechter, a lecturer in Talmud at Cambridge University, was less the “discoverer” of the Cairo Geniza than the first scholar to appreciate what this cache represented. Librarians, dealers, and dilettantes had known about this stash of documents since the 1880s; but in 1896, when two Scottish sisters showed Schechter a manuscript fragment they had purchased during their Middle Eastern travels, he immediately recognized verses from “The Wisdom of Ben Sira”—a Hebrew text from the 2nd century B.C.E. that had been lost since the 10th century and was only available in Greek and Syriac translations.

Schechter had the vision to realize what this trove of documents—left behind by the descendants of Jews from Palestine who had settled in Fustat—could mean to the study of Judaism. Moreover, he took it upon himself to go to Egypt, pack up more than 190,000 fragments covered with dust and debris he called “genizahschmutz,” and ship them to Cambridge’s Library for other scholars to sort and study.

Hoffman and Cole draw us into the excitement of discovery that makes a historian’s heart beat faster as they tell the stories of the lesser-known researchers who followed Schechter. Identifying and assembling fragments like a gigantic jigsaw puzzle, dedicated scholars were able to reconstruct the works of historical figures known only by legend: great liturgical poets, such as Yannai, who wrote the prayer book used by Palestinian Jews; Karaite writers Anan ben David and Yaakov al-Kirkisani, who challenged rabbinic authority in the 9th and 10th centuries; and freethinker Hiwi al-Balkhi, who questioned and received 31 replies from Saadia Gaon, the greatest Jewish leader of his time.

One of the most ambitious scholarly projects involving the Cairo Geniza was initiated by Salman Schocken, owner of a chain of department stores in Germany and a patron of literary arts who had a special interest in recovering “a national Jewish literature.” In 1930 he founded the Schocken Institute for the Study of Hebrew Poetry in Berlin, moving it to Jerusalem in 1933, after the Nazis came to power. There, an extraordinary succession of scholars combed through photostats of Geniza fragments from libraries all over the world to amass the most complete collection of Jewish medieval poetry ever gathered—what Hoffman and Cole call “an entire literature embodying the middle millennium of Jewish poetry’s 3000-year history.”

Jewish poetry was written mainly for worship until the mid-10th century, but the new Andalusian Hebrew poetry, influenced by Arabic poetry, often dealt with secular themes. Geniza scholars shed light on the founding father of Andalusian poetry, the Moroccan-born poet Dunash ben Labrat—and, in a remarkable act of forensic sleuthing, also identified the only known poem by a woman in this period: Dunash’s wife, who penned a moving farewell to her husband upon the eve of his forced departure. These verses are beautifully rendered in Peter Cole’s translations.

The Cairo Geniza contained all kinds of materials written in Hebrew script—not just poetry and sacred texts, but also business letters, court depositions, marriage contracts, bills of divorce, and personal letters written in the everyday language of Judeo-Arabic. Shelomo Dov Goitein, a scholar of Islamic history at the Hebrew University in the late 1940s, was captivated by the Geniza documents relating to the everyday lives of medieval Jews. “The historical figures who interested him most—shopkeepers and scribes, beggars and brides—were those whose lives emerged from the fragments that earlier scholars had brushed aside,” the authors write.

“Goitein’s approach was intensely democratic,” comment Hoffman and Cole. “He understood from the very start of his work with the documents, it was precisely those fragments of a more humdrum-seeming daily nature […] that would allow him to bring the Mediterranean world of the High Middle Ages alive on the page, in all its quotidian glory.” His magisterial 5-volume study, A Mediterranean Society: The Jewish Communities of the Arab World, published over a 20-year period from 1967 to 1988, is a groundbreaking work of social history.Hoffman and Cole have created a unique dual portrait of the discoveries and the scholars whose particular interests enabled them to see “treasure” where others saw “trash.” I found myself wanting to re-read so many portions that I sorely missed an index, and felt frustrated flipping pages for photos captions buried in the back. In a book as rich in fascinating and unfamiliar material as this one, some reader-friendly aids from the Nextbook series would have been greatly appreciated. 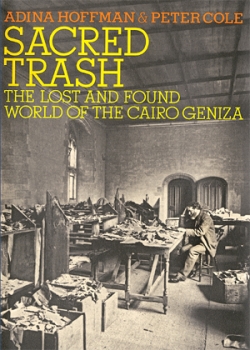