It's a good bet that many Americans are doing some deep thinking about the qualities we seek in a leader. Do we value charisma over moral purity? Do we forgive personal flaws in deference to rank and power?

People have been pondering such questions since antiquity, and perhaps the best-known case of a morally-ambiguous leader is King David. He is divinely-inspired psalmist and musician, brilliant military strategist, and respected judge, yet these attributes are marred by his failings.

Geraldine Brooks’ novel The Secret Chord portrays King David as supremely human, employing as narrator his constant companion, the prophet Natan (Brooks uses names in their transliteration from the Hebrew of the Tanach (the Five Books of Moses and other writings) throughout, rather than the more familiar spellings). As the leader of a group of bandits, David kills Natan's parents when they refuse to provide supplies for his followers. As Natan's own life is threatened, he is struck with the first of his prophetic visions. Recognizing Natan’s gift, David adopts the boy into his band, where he becomes a reminder of David's divine anointment, as well as one of the few able to offer him truthful criticism.

Brooks creates a compelling narrative of David's life, from his troubled youth to his dotage, framed by Natan's interviews with David's mother and his former consort, Mikhal. Brooks’ account refuses to shy away from accusing his followers of what we today would regard as war crimes – including rape and mass murder – carried out during tribal conflicts. She gives graphic accounts of heated battle scenes, sure to please fans of historical fantasy and adventure.

At times, a modern sensibility sneaks into Brooks’ retelling of this ancient story. Brooks allows the relationship between David and Saul's son, Yonatan, to be explicitly romantic, where other accounts describe it as a loyal friendship. Their love, tragically ended when Yonatan dies in battle, will garner sympathy from progressive readers.

Brooks also lends a feminist slant to Batsheva's tale, casting her as victim rather than temptress. Famously, the young wife of David's captain Uriah catches David's eye as she bathes on the roof of her home, visible to David from his window. He becomes obsessed and sleeps with her. The resultant child dies, and Uriah is also set up to die in battle. David then marries Batsheva, and with her fathers the child Shlomo (Solomon), who succeeds David as king. Brooks allows Batsheva to tell her side of the story in a conversation with Natan, following Shlomo's birth:

“‘How could you think....’ Her voice was low and furious. ‘Invited’? Her full lips compressed into an ungenerous line. ‘For someone who sees so much, you are so blind! I went up onto that roof seeking privacy. Except for my one maid, Uriah's house servants were all of them male...The roof, the dark – it was the only privacy I had. Or so I thought...’ I looked at Batsheva and suddenly I felt as I had throughout that long night...All through that vigil he had been raping her. And I had let myself call it a seduction.”

The crux of the story is King David’s immunity, predicated on his followers’ belief that he is God's designated successor to King Saul, anointed by the prophet Samuel. David's tactical and moral errors may earn him prophetic rebuke, but forced abdication is never on the horizon.

Brooks’ portrayal, while more detailed than the biblical passages dedicated to David's life, accuses him of nothing new. In her afterword, Brooks agrees with British diplomat and biographer Duff Cooper that King David’s flaws, as recorded in the Bible, are the greatest piece of evidence for his having lived, “for no people would invent such a flawed figure for a national hero.”

The Secret Chord, named for the first line in Leonard Cohen's song, “Hallelujah,” hits many of the right notes for lovers of historical fiction. Packed with hyper-realistic action and full of the foibles and triumphs of even the most divinely inspired human, it’s not only entertaining but raises questions about the qualifications for leadership, challenging those who believe in the Jewish prophecy that the Messiah will be a direct descendant of King David to ask: If a divinely anointed human king is imperfect, can the Messiah too be less than perfect? 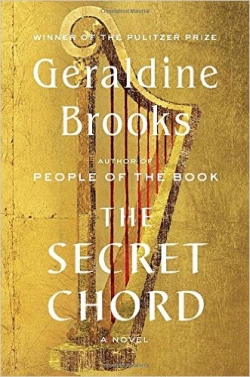