The U.S. and Israel, allies for more than 70 years, are sometimes at odds on specific policies and actions. Yaakov Katz’s new book Shadow Strike: Inside Israel's Secret Mission to Eliminate Syrian Nuclear Power (St. Martin’s Press) details one such disagreement involving a high-stakes threat to Israel in 2007.

As Katz, editor of the Jerusalem Post, tells it, in mid-April of that year, the director of Israel Intelligence, Meir Dagan  “… a short, bald and burly man with a limp and a cane walked into the West Wing of the White House” to meet with President George W. Bush, Vice President Dick Cheney, and members of the national security staff. He showed them photographs of a secret nuclear reactor in a remote part of Syria; it had been supplied by North Korea and was nearing an operational or “hot” stage.

The Mossad director also made it clear that Israel could never tolerate a hostile neighbor acquiring the capability to produce an atomic weapon. He did not need to remind the Americans that in 1981, the Israeli Air Force (IAF) destroyed a nuclear plant in Iraq.

In the case of Syria, Katz describes the perilous operation in which Israeli commandos disguised as Syrian soldiers brought back radioactive soil samples taken from near the reactor. Presented with overwhelming evidence, the American leaders did not doubt the existence of the covert facility nor that Israel faced a significant nuclear threat.

Following Dagan’s visit, intense discussions ensued between Washington and Jerusalem about whether to “contain” Syrian President Bashar al-Assad’s threat by going “…public with the reactor and shame Assad on the global stage” or by destroying the facility. There was also a high-level back and forth between Bush, who argued for a diplomatic solution to the crisis, and Cheney, who pressed for a U.S. military strike on the reactor. Secretary of State Condoleezza Rice and Defense Secretary Robert Gates both opposed Cheney’s position, urging caution.

President Bush asked for more proof of the reactor’s operational status, saying, “no core, no war” – if the reactor’s core was not fully operational, there was no need for a military attack. Even after the Israelis provided the proof, Bush still believed diplomatic, political, and economic pressure could force Assad to abandon his quest for a nuclear weapon, just as Libyan leader Muammar al-Gadhafi had done earlier, in response to similar American pressure.

Meanwhile in Israel, Prime Minister Ehud Olmert’s political standing was at a low point in the aftermath of Israel’s disastrous and inconclusive 2006 war with the terrorist group Hezbollah, based in Lebanon. Worried that an unsuccessful attack on the Syrian nuclear facility would not only weaken Israeli’s national security, but also further damage his political reputation, Olmert agreed with Israeli intelligence officials that that the Syrian reactor posed an existential threat to Israel and had to be destroyed.

Olmert did not believe that Cheney’s stance in favor of U.S. military intervention would prevail, but figured that Bush would stand behind Israel, if it exercised the military option on its own. More concerning was how Assad might respond. Would he retaliate against Israel for violating Syrian sovereignty? Would he demand his Arab League partners join him in a war of revenge?

None came. Syria never acknowledged the attack, and the bombed-out facility was quickly covered with cement.

Katz writes that the U.S. did not share Israel’s sense of urgency about a nuclear threat on its northern border, and the administration “had legitimate concerns that a strike against Syria would…escalate into a regional conflagration.”

Ultimately, Israel’s decision was driven by its raison d'être – self-reliance in the defense and preservation of the Jewish people. It is in that spirit that Katz invokes the words of the sage Hillel, who asked some 2,000 years ago: “If I am not for myself, who will be for me?” 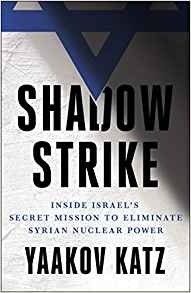