A Pakistan-born Muslim woman with a Ph.D. from a South African university who directs the Holocaust, Genocide and Interfaith Education Center at Manhattan College, a New York City Catholic school, has written a pioneering and courageous book about the Shoah (Holocaust).

In Shoah Through Muslim Eyes, Afridi goes where few Muslim authors have ventured: a piercing cri de coeur delving into what she terms the “unprecedented” evil of Nazi Germany’s attempt to annihilate the entire Jewish people.

Afridi, a faithful Muslim, is appalled, better, is ashamed of the horrific anti-Semitism and Holocaust denial that exists among many followers of Islam throughout the world. Indeed, she writes about her frustration and exhaustion when she encounters the false negative perceptions held by her co-religionists “…about Jews…the Shoah, Judaism and Zionism.”

She believes such hatred does not represent authentic Islam: “…what remains even more painful for me as a Muslim is the denial of the Shoah among Muslims and Muslim nations…we cannot let false rumors harm others, especially since the Jews planted the seeds of Islam…”

Afridi is well aware of a series of genocides including mass killings of Sudanese, Armenians, Native Americans, Cambodians, Rwandans, Bosnians, and others.

But she believes the Shoah is “unique.” Afridi employs the Hebrew word – Shoah – instead of Holocaust. The latter term, she asserts, denotes a burnt offering that conveys the idea of a religious sacrificial offering. But Shoah means a total destruction devoid of any spiritual meaning.

An important take away from her studies is Afridi’s list of ten reasons the Shoah is “unprecedented” in human history:

In 1995, despite opposition from friends and family, Afridi traveled to Israel, where she “…was able to be with students at Hebrew University who were from all walks of life… everyone assumed I was just another Jew from America.” But as a Pakistani Muslim she also could visit the Dome of the Rock. “My trip to Jerusalem changed my life.”

A highlight of this carefully crafted book is Afridi’s personal interviews with three survivors of the Shoah, including the French Jewish screen star Robert Clary. Like her experiences in Israel, Afridi was deeply moved by the survivors’ individual histories, proving once again that visits to Israel and face-to-face encounters with “The Other” have the potential to demythologize stereotypes and caricatures.

Because her parents were originally from India and sought refuge as Muslims in Pakistan, Afridi has an affinity for Jews who fled or were expelled from Muslim Egypt because of their religion and/or their affinity for Zionism. She sees in them a parallel refugee experience like that of her own family.

She also devotes attention to the often-unknown history of Jewish communities in North Africa during World War II when German, Italian, and Vichy French armed forces occupied areas of Muslim countries, including Morocco, Algeria, Libya, and Tunisia. She describes how some Muslims, including Morocco’s king, helped save Jews from capture and death.

Afridi musters both her considerable scholarship and her profound faith commitment to excoriate fellow Muslims for their heinous, vulgar, and religion-based attacks on Jews, Judaism, the historical reality of the Shoah and the State of Israel.

One hopes this important book will spur other Muslims to join with her in in building human bridges of reconciliation and mutual respect with the Jewish people. 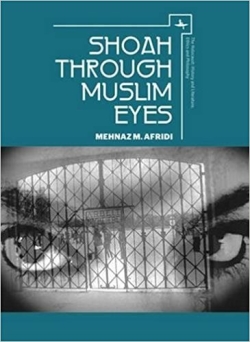