The Six-Day War: The Breaking of the Middle East

For Jews of a certain age, June 5, 1967 is and always will be a date as familiar as one’s own birthday. It was on that day that Israel launched a preemptive strike in response to the mobilization of Egyptian forces along the Israeli border in the Sinai Peninsula and Syrian forces in the Golan Heights.

By June 11th, the war was over. The Israel Defense Forces (IDF) drove the Syrians from the Golan Heights, forced the Egyptian army back across the Suez Canal, captured the West Bank from Jordan, and united Jerusalem under Jewish rule for the first time in 2,000 years.

This year marks the 50th anniversary of the Six-Day War. It is a time to reflect on the war’s causes and enduring consequences, and a good place to begin is by reading The Six-Day War: The Breaking of the Middle East (Yale University Press, 2017) by Guy Laron, a lecturer in international relations at Hebrew University. In his meticulously researched work, Laron shatters the David vs. Goliath myth evoked by the war, as he sheds new light on the motives and pressures of leaders on both sides.

We learn that Israeli Minister of Defense Moshe Dayan saw secret plots wherever he looked. Ariel Sharon, head of the army training branch and a rising star, believed that the only solution to increased military activity in Egypt and Syria was a war that would end with territorial expansion in Israel’s east and north. And IDF Chief of Staff Yitzhak Rabin had a nervous breakdown on the eve of the war. What these men had in common, argues Laron, was the desire to turn Israel into a regional military power. Seeing the opportunity, they persuaded a weak prime minister, Levi Eshkol, and a split cabinet to endorse a first strike, knowing that Israel faced no imminent existential threat. In Laron’s view, that made the long-planned offensive an ambitious war of choice in keeping with what he calls “the Israeli cult of the offensive” – strike them before they strike at us.

What sets Laron’s book apart from others on this subject is the extent to which he skillfully presents the big picture. For example, he analyzes the influence of the global superpowers, each with its own agenda, on the developing nations in the Middle East at a moment when all were wrestling with severe balance-of-payments issues due to wasteful state-controlled economies. In the years leading up to the June 1967 war, the United States and the Soviet Union curtailed foreign aid in favor of increasing weapons sales. Israeli and Egyptian generals took this to mean that the superpowers would come to their support in the event of war. The military buildup, Laron concludes, empowered the generals and destabilized the region.

Laron sets the war in the context of societies strained by economic and political change. All the countries that went to war on June 5th, including Israel, were struggling with burgeoning, unaffordable armies and wasteful state-controlled economies. In the Arab states, poverty and lack of opportunity for the young were leading to anarchy.

Laron contends that Syria was the primary culprit in pushing its neighbors into war. Syrian politics was a mess of tribal, sectarian, and ego conflicts. Its economy was in shambles, largely due to corruption, and war was a way to divert attention away from domestic problems. Syria had further weakened itself by forming the United Arab Republic, a union with Egypt that dissolved amid charges of treachery, leaving the Syrian leadership isolated, paranoid, and outmatched by the charismatic leader of Egypt, Gamal Abdel Nasser. When the 1967 war broke out, the Syrian regime kept back its best tanks and men to protect the rulers in Damascus from their own people.

Putting aside many of the war’s unresolved political issues, such as the continued occupation of the West Bank and Golan Heights, Laron reminds us that the Israeli cult of the offensive still holds sway, and the IDF remains the most powerful institution in Israeli society. “Like many other parts of the late developing world, he says, “the Middle East remains in the grip of generals. Perhaps that is the reason why there the sound of gunfire never quite dies down.”

Israel eventually made peace with Egypt and Jordan, but in the 50 years since the Six-Day War, animosity between Jews and Palestinians has only increased, as has the arms race in the Middle East.

While Laron’s prognosis is not encouraging, his analysis of the causes and consequences of the Six-Day War is highly recommended for anyone who wants to have an informed conversation about one of the world’s most intractable conflicts. 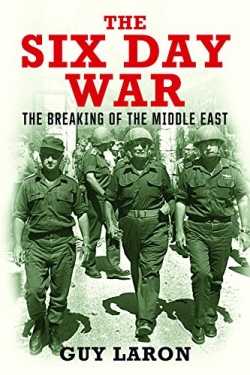