Book Review: Squirrel Hill: The Tree of Life Shooting and the Soul of a Neighborhood

Pittsburgh’s quaintly named Squirrel Hill had been one of the oldest and safest Jewish neighborhoods in the United States. That changed on Shabbat morning, October 27, 2018, when a lone shooter murdered 11 worshippers in the Tree of Life synagogue. It was the deadliest antisemitic attack in American history.

Mark Oppenheimer’s Squirrel Hill: The Tree of Life Shooting and the Soul of a Neighborhood (Knopf), focuses not on the killer, but on the reactions of Pittsburghers in general, and especially the responses of Squirrel Hill residents. That is why it is likely to become the definitive study of the horrific massacre that attracted global attention.

Oppenheimer, the director of the Yale Journalism Initiative and a former religion columnist for The New York Times, is uniquely qualified to describe the shooting and its aftermath. His great-great-great grandfather settled in Pittsburgh in the 1840s, and the author’s father was born in the city.

In the course of his research, Oppenheimer made 32 trips to Pittsburgh from his home in Connecticut. He writes: “The question that I started coming to Pittsburgh with,” he writes,  “was how does the fact of Squirrel Hill, with its close-knit neighborhood—close-knit both geographically, but also emotionally and spiritually—affect people’s recovery in the aftermath of a mass tragedy?”

For Oppenheimer, the project was ultimately a hopeful  --  hopeful because a sometimes divided Jewish community----i.e., secular vs. Orthodox---immediately came together for healing and comfort. And many people and institutions in Pittsburgh, including the leading local paper, The Post-Gazette, the city government, the city’s beloved sports teams, Christian and Muslim clergy, and what the media likes to call “ordinary people,” all publicly rallied in solidarity with the stricken Squirrel Hill Jews. Forty-two diverse groups from around the country showed their support by visiting Squirrel Hill in the immediate aftermath of the massacre.

Perhaps the most visible sign of such support was The Post-Gazette’s front page headline that appeared 6 days after the shooting. Executive Editor David Shribman, whose daughter Natalie is a Reform rabbi, posted the first four words of the Kaddish (mourner’s prayer) in large Hebrew letters.

Oppenheimer devotes much of his book to extensive interviews with Pittsburgh’s rabbis, especially Rabbi Jeffrey Myers of Tree of Life. The author describes in detail the physical, emotional, and spiritual traumas suffered by both rabbis and lay people, and he salutes the resiliency of a badly wounded Jewish community.

President Trump’s visit to Squirrel Hill 3 days after the shooting divided the community’s Jewish residents. The bitter neo-Nazi events in Charlottesville a year earlier hung over the presidential visit. Many Squirrel Hill residents blamed him for creating a toxic atmosphere that fueled antisemitic physical assaults, and there was a public rally protesting the visit. Others in the Jewish community felt differently. Oppenheimer reports, "The rabbi [Myers] had agreed to receive the president...a decision that angered some of his congregants and pleased others. The most common response I heard was something like, 'What could he do? A rabbi has to meet with everyone.' According to reports, the president never saw the crime scene."

In a nation becoming inured to mass shootings, Oppenheimer’s book is a vivid reminder of how one unique community did not lose its collective neshama (soul) or courage in the face of murderous terror.

On a personal note, I was born in Pittsburgh and for the first six years of my life lived with my family at 5411 Bartlett Street in Squirrel Hill. I still have family members living in Squirrel Hill. Tragically, two of my cousins, Cecil and David Rosenthal, both in their fifties and the youngest of the victims, were among the worshipers who were shot to death at the Tree of Life synagogue.

Oppenheimer tells us that David and Cecil were well known for their friendly natures. David had a special relationship the Squirrel Hill’s local firefighters. Cecil was said to know “everyone” in his neighborhood and “everything” about them, including times of marriages, divorces, illnesses, and deaths. Little wonder Cecil was called “The Town Crier.”

I was told by one of my cousins that greeting fellow worshipers near the synagogue entrance each Saturday morning was what Cecil and David “lived for.” As the shooter entered, they were among his first victims.

The murders of the Rosenthal brothers was a shattering moment for our branch of my family that had felt at home in Pittsburgh for over 130 years. Although that feeling of security is now gone, I find the resolute words of the Cowardly Lion in The Wizard of Oz encouraging: Not now, not no how, not never. They ain’t chasing us out of our house!” That could be the motto of the 30.000 Jews of Squirell Hill. 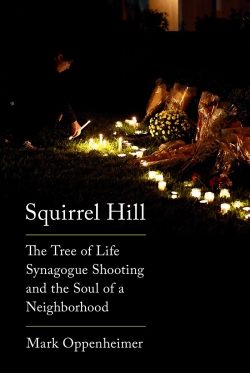