During World War II, I loved reading 10-cent comic books and trading them with friends. I was especially infatuated with Superman, Batman, and Robin because they were fervent American patriots and fiercely anti-Nazi in their extraordinary exploits.

My fascination with those superheroes grew when I learned that two young Jewish men, Jerry Siegel and Joe Shuster, created Superman in 1938 and gave him the Hebrew-sounding birth name “Kal-El.” A year later, another Jewish duo, Bob Kane and Bill Finger, became the literary and artistic creators of Batman.

After the war, my comic book heroes pivoted toward combatting criminals and other villains menacing Superman’s “Metropolis” and Batman’s “Gotham City.” The motives of these two fearless fighters were pure, their morality unquestioned, their emotional lives unexamined. Consequently, their stories became all too predictable.

That squeaky-clean image of the superhero changed in the 1960s, when New Yorker Stanley Lieber (a.k.a. Stan Lee) transformed the comic book genre by co-creating edgy, sensitive, morose, emotionally challenged characters such as Spider-Man, Iron Man, X-Men, and Fantastic Four for Marvel Comics. As their chief writer, editor, director, and producer for decades, he helped to turn Marvel into an economic and cultural powerhouse.

Author Liel Leibovitz, born into an Israeli rabbinic family, was an avid reader of Lee’s comic book creations growing up. Though not the first writer to elaborate on the Jewish dimensions of comic books, Leibovitz expands the genre by drawing upon the Bible and Talmud to explain the ethical behavior and, yes, the personal theology of the Marvel characters.

Although Lee’s creations were often mocked in intellectual circles as juvenile pablum, Lee succeeded in capturing the political angst and social upheavals of the 1960s: the period of three traumatic political assassinations, the unwinnable Vietnam war, and the bitter struggle for Civil Rights in a divided nation.

One of Lee’s most vivid creations is the brilliant nuclear scientist Dr. Bruce Banner, whose alter ego is The Incredible Hulk. Both Banner and Hulk, Leibovitz writes, are “lonely…and struggling to make sense of the terrors and beauties…” of their existence on earth.

Calling upon his Jewish knowledge, Leibovitz cites the teaching of the late rabbi, Talmudist and philosopher Joseph B. Soloveitchik. In his 1965 essay The Lonely Man of Faith, Rabbi Soloveitchik described the “loneliness” of the biblical Adam who, like The Incredible Hulk, exhibited two distinct identities.

The “first” Adam, like Banner, “…aspires to be godlike by constantly creating new things…the mathematical scientist.” The second, like Hulk, isn’t “…interested in achievement. Instead, his are more metaphysical concerns…a more intimate relationship with his Creator...he wants to better understand the terms of the otherworldly conversation…”

At first glance, this might seem like a big stretch, a mental leap of comic book proportions – but Leibovitz pulls it off, and even a skeptical reader can recognize that Stan Lee’s band of superheroes represents the human condition far deeper than my beloved yet two-dimensional comic book heroes Superman and Batman.

Millions of readers, many of them anxiety-stricken college students, identified with Lee’s creations: soulful heroes riddled with self-doubt and alienated from nature and the divine.

Leibovitz notes that in the 1990s, Lee’s psychologically-challenged characters had lost much of their appeal among the once youthful readers who had become “…middle aged men with disposable incomes and their love for comics had hardened into a calculation informed by nostalgia and greed.” In fact, auction houses began selling Lee’s 1960s original comic books for high prices to collectors as high art.

Stan Lee died on November 12, 2018, at age 95 – but even into his ninth decade, he remained a gifted mythmaker. Public fame and respectability followed the success of movies and TV shows based on his characters, especially the Marvel Cinematic Universe. In 2008, President George W. Bush presented Lee with the Medal of Freedom, America’s highest civilian honor.

Lee also famously held cameos in almost every Marvel movie and TV show created, especially during the last 20 years of his life. In his particularly poignant cameo in Spider-Man 3, he places his hand on Peter Parker, Spider Man’s alter ego, and says, “You know, I guess one person can make a difference. ‘Nuff said.”

Rabbi A. James Rudin is the former head of the American Jewish Committee’s Department of Interreligious Affairs and author of seven books, most recently Pillar of Fire: A Biography of Rabbi Stephen S. Wise. He served as a U.S. Air Force chaplain in Japan and Korea. 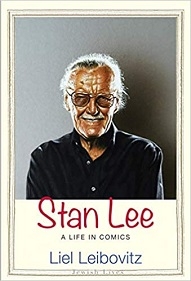