Book Review: The Star and the Scepter: A Diplomatic History of Israel

Jewish diplomacy began in biblical times, when Abraham negotiated with King Abimelech over possession of precious wells in an arid land. In order to protect their vulnerable communities and ensure Jewish continuity, generations of Jewish leaders have

In his new book The Star and the Scepter: A Diplomatic History of Israel (Jewish Publication Society), Emmanuel Navon, a lecturer at Tel Aviv University and a fellow of the Israeli Institute for Strategy and Security, begins with the biblical period, including the kingdoms of David and Solomon, and concludes with U.S. President Donald Trump’s 2020 “Deal of the Century,” intended to settle the current Israeli-Palestinian conflict.

For Navon, a French-born academic who later moved to Israel, “the star” represents the spiritual faith and destiny of the Jewish people, while “the scepter” symbolizes the eternal quest for Jewish national sovereignty in the Land of Israel.

In 508 pages, Navon covers three millennia of diplomatic history, complete with a lengthy bibliography, hundreds of endnotes, and an excellent index. The first 67 pages get us to the rise of the modern Zionist movement in the 19th century. The rest details modern Israel’s birth pangs and its intense political, military, and diplomatic struggles to survive as a Jewish state, despite fierce Arab hostility and rejection for most of its existence.

In detailing the extraordinary diplomatic efforts that culminated with the November 1947 United Nations vote on the partition of Palestine into Jewish and Arab states, Navon explains that the historic vote did not “create” the State of Israel because it was non-binding, non-enforceable, only a “recommendation.”

The author gives much of the credit for Israeli statehood to David Ben-Gurion, who in Navon’s view practiced a superb form of Jewish realpolitik by pressing forward for an independent state despite internal and external pressure to delay, postpone, or settle for less than full Jewish sovereignty.

As a former rabbi in Kansas City who knew the Jacobson family, I was pleased that Navon recognized the key diplomatic role played by Eddie Jacobson, who fought alongside Harry S. Truman in WWI and later became the future U.S. president’s business partner in a haberdashery shop.  Navon writes:

When Truman initially refused to meet with Chaim Weizmann, an upset Jacobson replied, “This isn’t like you, Harry.” Truman replied, “You baldheaded son-of-a-bitch. You win. I’ll see him.’” On November 19, 1947, just 10 days before the UN General Assembly vote, Weizmann and Truman met for two hours at the White House. Deeply influenced by Weizmann, Truman made certain the U.S. voted for partition.

Another of Navon’s heroes was Israel’s Foreign Minister Abba Eban, who recognized Israel had to “leapfrog” over hostile  Arab neighbors and create diplomatic relations with more distant nations, beginning with the Shah’s Iran, secular Turkey, and Emperor Hailie Selassie’s Ethiopia – a diplomatic trifecta that collapsed with the ascent of Ayatollah Khomeini, Recep Tayyip Erdogan, and a radical Marxist group in Ethiopia.

When Abba Eban complained that Israel was “starved” for diplomatic recognition beyond the nations of Europe, the United States, and Canada, Prime Ministers Golda Meir and Levi Eshkol and President Yitzhak Ben-Zvi set out to fill that gap by cultivating ties with newly independent African states; by 1972, Israel had 32 consulates and embassies across Africa.

Navon provides insights into Israel’s diplomatic efforts to strengthen ties with Russia, India, China, Japan, and Latin and South American countries, with varying degrees of success. He also analyzes Israel’s enduring peace treaties with Egypt and Jordan but completes the book prior to the recent breakthroughs in diplomatic relations with the United Arab Emirates, Oman, and Bahrain.

Israel’s most intractable diplomatic challenge continues to be a peace deal with the Palestinians. Navon chronicles the negotiations that occurred in the waning days of Bill Clinton’s presidency in 2000, when Israeli Prime Minister Ehud Barak met with Palestinian Authority Chairman Yasser Arafat for peace talks at Camp David. Arafat shattered any hopes of a successful outcome by rejecting Israel’s significant territorial concessions with an emphatic “No!” A furious Clinton called Arafat “a liar who screwed up the whole thing and deceived us.” Chief American negotiator Dennis Ross warned incoming Secretary of State Colin Powell, “Don’t believe a word from Arafat. He’s a con-man.”

Navon concludes on a positive note:

“…Israel will continue to thrive by remembering the ultimate lesson of its unique past…striking a never-ending balance between faith and power – between the star and the scepter.” 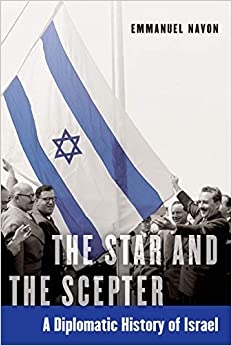