Book Review: A State at Any Cost: The Life of David Ben-Gurion

Tom Segev’s voluminous biography, A State at Any Cost: The Life of David Ben-Gurion, gives new meaning to the Latin phrase – carpe diem – seize the day. That is just what David Ben-Gurion (1886-1973) did when he proclaimed the independence of the State of Israel in Tel Aviv on May 14, 1948.

The now-or-never philosophy of Israel’s “founding father” is captured in the video below, which shows Ben-Gurion confidently stepping out of a Lincoln sedan and proudly saluting the waiting crowd before striding into the Tel Aviv Museum, where he will announce the fateful declaration.

In the video, we see a short, pudgy man with two protruding tufts of white hair crowning his large, balding head. In his left hand is a briefcase, presumably containing the Hebrew text of the Israeli Declaration of Independence, a document he personally rewrote the night before because he was dissatisfied with the original draft by his Zionist colleague, Moshe Shertok (Sharett).

Ben-Gurion’s salute signaled to a skeptical world his steely resolve in the face of opposition from President Harry Truman’s top two cabinet members: Secretary of State George C. Marshall and Secretary of Defense James V. Forrestal, misgivings also voiced by his more cautious Zionist comrades, as well as the threat of an imminent war with better-equipped Arab armies.

In his pursuit of a Jewish state at any cost, Ben-Gurion had rejected every alternative solution, whether a bi-national Arab-Jewish state or federation, autonomous Jewish areas, geographically separated cantons, an internationally administered mandate, or a U.N. trusteeship.

Segev, one of th Israeli “New Historians” who have demythologized the “official” accounts of the state’s founding and early years of independence, had full access to Ben-Gurion’s thousands of diary entries, letters, articles, and speeches. What emerges in this “warts and all” biography is the portrait of a complex man who was personally aloof, often depressed, mean-spirited, indifferent to his wife and three children, and a relentless adversary of many other prominent Zionist leaders, particularly Chaim Weizmann, Levi Eshkol, and Menachem Begin.

Ben-Gurion believed Weizmann, living for decades in England, was too enamored of Britain’s ruling “Establishment” that reneged on the promises of its Balfour Declaration. On the eve of the 1967 Six-Day War, Ben-Gurion predicted that the weak Prime Minister Eshkol “… will descend (Israel) into perdition.” Menachem Begin was Ben-Gurion’s longtime right-wing ideological opponent.

Born David Gruen, the future prime minister left his native Poland for Palestine in 1906 at the age of 20 to pursue his obsessive goal: the creation of a Zionist state with a large Jewish majority and as few Arabs as possible. But he was under no illusion that accomplishing this goal would result in an armed conflict, inflicting many deaths and much suffering on both sides.

Ben-Gurion envisioned a Jewish state with a population of several million Ashkenazi Jews, like himself, whom he considered far better “Zionist physical material” than Jews from North Africa and the Middle East. But the murder of six million mostly Ashkenazi Jews in the Holocaust ended that dream. After 1948, Ben-Gurion had to accept the reality that a Jewish majority in the newly independent Israel could only be achieved through mass Jewish immigration from Iraq, Morocco, Egypt, Yemen, and other dominantly Muslim countries that had become hostile, or at best inhospitable, to Jews after Israel became an independent Jewish state.

Segev devotes much of the book to Ben-Gurion’s lengthy stays during the 1940s in Paris, London, and Washington, D.C., where he lobbied for diplomatic, financial, and political support, while privately conducting at least four extra-marital affairs.

The acknowledged leader of the 600,000 Jews living in British Mandate Palestine raised millions of dollars from wealthy American Jewish business leaders, mostly for armaments and to fund the underground campaign to circumvent the British naval blockade that was preventing Holocaust survivors from reaching Palestine.

Segev faults Ben-Gurion for the unpreparedness of the Haganah (the “official” forerunner of the Israel Defense Forces) for the 1948 War of Independence but praises him for effective military leadership during the war. Much of the credit goes to Ben-Gurion’s young associate, Shimon Peres, who succeeded in obtaining from several European nations the weaponry desperately needed by the fledging state to prevail.

Segev uses new archival material to describe the defining events that shaped Ben-Gurion’s worldview: Theodor Herzl’s charisma, antisemitic Tsarist pogroms, the Balfour Declaration, Ottoman rule in Palestine before World War I, the British Mandate, the bitter Zionist organizational conflicts, the Holocaust, the wars Israel fought with its Arab neighbors, Ben-Gurion as a long serving prime minister, the Eichmann trial, the Ben-Gurion-Konrad Adenauer relationship that brought West Germany and Israel together after the Shoah (Holocaust), and much more.

Segev strips away the patina of hero worship, while still recognizing the achievements of a statesman, whose formidable, single-minded determination ushered the Jewish state into existence.

Rabbi A. James Rudin is the former head of the  American Jewish Committee’s Department of Interreligious Affairs and author of seven books, most recently,  Pillar of Fire: A Biography of Stephen S. Wise. He served as a U.S. Air Force chaplain in Japan and Korea. 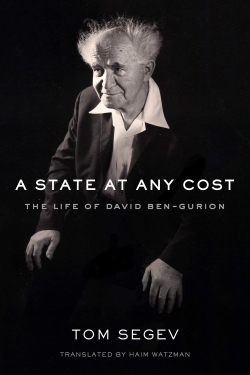