Book Review: The Sun and Her Stars: Salka Viertel and Hitler’s Exiles in the Golden Age of Hollywood

In her book, The Sun and Her Stars: Salka Viertel and Hitler’s Exiles in the Golden Age of Hollywood, author and book critic Donna Rifkind vividly describes the 1930s and 1940s, when 10,000 German-speaking refugees, most of them Jews, found a safe haven from Nazism in Los Angeles. These exiles included professors, novelists, stage and film directors, symphony orchestra conductors, screenwriters, music composers, film actors and actresses, movie producers, and a host of motion picture technicians. Historians have termed the exodus  “…the most complete migration of artists and intellectuals in European history.”

Part of the latter’s harrowing escape route included a six-week stop in the French city of Lourdes. Rifkind reports that Franz Werfel, though Jewish, “visited the Catholic shrine dedicated to Bernadette Soubiros and prayed for a miracle. He vowed that if he managed to escape from Europe, he would write a book to honor the saint.”

His The Song of Bernadette, published in 1941, was a bestseller, and the film of the same title won many awards. Rifkind sadly notes there were “Not nearly enough miracles” for those who desperately attempted to escape Nazism in the years before America’s entry into World War II.

Many newcomers who sought employment in the burgeoning film industry had a limited command of English, were uncomfortable with the social informality of southern California, and felt alienated and humiliated by their loss of cultural prominence in Europe. Max Reinhardt, the legendary director who had once simultaneously operated 11 major theaters in Berlin, was reduced to opening “…a drama school on Sunset Boulevard and began to give acting lessons to young Californians, most of whom had little idea who he was.”

At the epicenter of the Hollywood refugee community was screenwriter and actress Salomea Sara “Salka” Steuermann Viertel, who had left Vienna in 1928 for Los Angeles with Berthold, her stage director husband, and their three young sons. Salka, a self-described “Jewish girl from Stambor,” a small Galician city now in western Ukraine, spoke eight languages and rapidly assumed the role of “den mother” for the often bewildered exiles. Each Sunday afternoon for many years, her Santa Monica home was the scene of weekly gatherings, where the exiles could speak German and enjoy Salka’s extraordinary cooking and gemutlichkeit (“cozy friendliness”). Her weekly gatherings were, in fact, a largely Jewish “Berlin-by-the Pacific.”

Totally at home in their native language, culture, and cuisine, the refugees argued with one other, made love to each other, and closed movie deals – all in the large Viertel house. Salka and her husband, though, led emotionally, sexually and geographically separate lives. Berthold was frequently directing plays in New York City and Europe for long stretches of time with his mistresses. During his lengthy absences in the 1930s, Salka became the highest paid screenwriter at the fabled MGM studio, where she wrote several movie scripts for her close friend, Greta Garbo.

Salka exuded great personal warmth with a complex sexual life that included a series of lovers, including Gottfried, Reinhardt’s son. Salka Viertel could have been a character in a Thomas Mann novel, a Berthold Brecht play, or a Billy Wilder movie.

A fierce anti-fascist, Salka was never a Communist, although J. Edgar Hoover’s FBI erroneously believed otherwise. She contributed financially to a relief fund that assisted destitute German-speaking refugees in the film industry.

Salka and Berthold became naturalized citizens, and their European-born sons, especially, Peter, eagerly sought to “become fully American.” Utilizing his knowledge of German, during World War II, Peter served as a U.S. military intelligence officer and later wrote the screenplay for the 1951 award-winning film “Decision Before Dawn,” as well as “The African Queen” and other notable films.

The Sun and Her Stars provides a vivid picture of the “Golden Age” of Hollywood, but the book also describes how the many exiled German and Austrian Jews – through their films, books, music, and plays – left an indelible mark on American culture.

Salka was among those refugees who returned to Europe after the war. While she was able to save her mother, a brother, and a sister, other members of her family, including another brother, were murdered during the Shoah. She was furious upon discovering that many Germans and Austrians acted as if nothing significant had happened between 1933 and 1945.

The “Jewish girl from Sambor” loved Santa Monica, America, Hollywood, and her Sunday afternoon salons. But at the end, divorced, in poor health and with little money, she returned “home” to the German-speaking community in Klosters, Switzerland, where she died at the age of 89.

Perhaps Berthold Viertel had it right when he wrote: “One does not wander without punishment under the palms.” 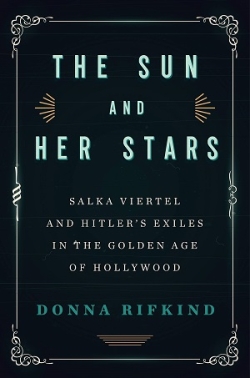