In his new book The Survival of the Jews in France, 1940-44 (Oxford Press), Jacques Semelin, professor emeritus of history and political science at the Paris Institute of Political Science, focuses on a frequently overlooked statistic: 240,000 of the 320,000 Jews living in France in 1940 survived the war within that nation’s borders.

After the French armed forces and national government quickly collapsed when Nazi Germany invaded in May 1940, the conquerors divided France into a German-occupied area in the north and a pro-Nazi Vichy regime, the “Free Zone,” in the south. In both regions, French police and gendarmes were zealous in rounding up Jews for deportation “to the East,” a euphemism for German death camps.

A horrific example of French collaboration with the Nazis was the July 1942 roundup in Paris of 8,160 Jews. Before being deported, they were incarcerated for five days under appalling conditions at the Velodrome d’Hiver, an indoor sports stadium. The roundup shocked many people because it included women and children; fewer than 100 survived the war.

Semelin, an expert on the Holocaust and civil resistance, focuses on how Jews “survived” the Holocaust by devising strategies and actions, such as fleeing Paris and moving to the sparsely populated countryside in the Free Zone, acquiring false names and identity papers, posing as Catholics, being hidden by non-Jews, and “blending in” with the general population.

Semelin describes how Jews became agricultural workers or adopted other occupations during the war: “They helped out in the fields or on farms, while offering their skills as a shoemaker, tailor, or seamstress. Such service…helped considerably to acquaint the two populations – at first worlds apart – with one another.”

Even under the occupation, being a French citizen offered Jews some legal protection and security. Stateless or foreign-born Jews residing in France were twice as likely to be deported than Jewish citizens. And, of course, it helped to have enough money for bribes, shelter, food, and transportation. Also, because France was a large country, half of which was “governed” by Vichy, Jews could hide more easily than if they lived in Holland or Belgium.

Some French Jews were saved by “righteous gentiles.” Under the leadership of Protestant pastor Andre Trocme, for example, the village of Le Chambon-sur-Lignon became a safe haven for more than 1,000 Jews, including children. The pastor and his wife, Magda, were designated Righteous Among the Nations by Yad Vashem, Israel’s Holocaust remembrance center.

Another example: In August 1942, the year of the most deportations, Toulouse Archbishop Jules-Géraud Saliège issued a pastoral letter calling anti-Jewish actions “not permissible.” Semelin writes, “Notwithstanding the silence of Pope Pius XII, many senior Catholic prelates protested openly when foreign Jews first began to be arrested in 1942.”

Professor Michael R. Marrus of the University of Toronto, an authority on Vichy France, does not question Semelin’s Jewish survival statistics but points out that it was the invasion of Normandy that accounts for the high survival rate of French Jews. He writes:

“Let us assume that the Allies might have failed to establish a beachhead in Normandy in June 1944….If so, the war might well have continued for another few years. And had it done so, the Germans would almost certainly have finished the Final Solution in France. And in that case, none of Semelin’s conditions would have had any effect.”

Putting aside Marrus’ speculation of what might have happened, individual French Jews lived to tell the tale. One of them was Capt. Charles Tenen, who was a member of my congregation at Itazuke Air Base in Japan, where I served as a USAF Chaplain in the 1960s. His parents immigrated to France from Russia in 1926, where Charles was born six years later. He and seven family members fled Paris in 1940 and spent the next four years successfully hiding in a farmhouse in the French countryside that was owned by a friendly farmer who sheltered the Jewish family.

Beside the constant fear of capture and deportation, Charles told me of a narrow escape from death. While walking on a country road in 1944, a truck belonging to the local underground group passed him. At that moment, a German plane strafed the area, nearly killing him. Vichy authorities, he said, were not always efficient in carrying out their anti-Jewish policies. Charles’ family survived the war and he eventually immigrated to the United States and, “to become fully American,” he joined the U.S. Air Force. 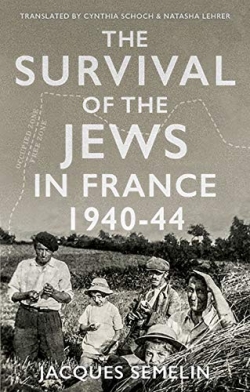