Book Review: Treyf: My Life as an Unorthodox Outlaw

Her paternal grandfather's religious fervor belied the physical abuse he inflicted on his son. Altman describes in excruciating detail her father gorging himself on non-kosher pork sausage after his father, deep in religious bliss, carries a Torah scroll down the aisle of the synagogue without stopping to acknowledge the presence of his son, who is on leave from the Navy:

"He is elsewhere, in a dream, he is a child, running through the dusty streets of Novyy Yarchev. Tears cascade down his cheeks as he passes his son, who reaches forward to touch his tallis to the Torah resting in my grandfather's arms. He floats past my father like a ghost."

Spam and bacon become weapons in the constant domestic battles waged between Elissa’s glamorous singer-model mother and violence-prone father. Her beloved maternal grandmother was a closeted lesbian, and Elissa herself came out to her family as an adult. While her father and his second wife were relatively quick to accept her long-time partner, Susan, her Aunt Sylvia reacted as though their relationship was treyf (forbidden foods according to kashrut).

Pork, the ultimate forbidden food, is a ubiquitous presence in the book, which opens in a butcher shop in the Berkshires, where a happily married Elissa is picking up half an heirloom pig that was specially prepared, slaughtered, and butchered for her. Festive family meals were often held at Chinese restaurants over plates of pork ribs and pork-fried rice. The contradictions between strong Jewish identity, sometimes coupled with deep religious sentiment, and party platters of ham and cheese are the beating heart of Altman’s narrative.

Freeing herself from the contradictions of her upbringing – attending a kosher day camp but eating treyf at home and in restaurants – Elissa went on to become a cookbook retailer, editor, and author.

Patchwork in both feeling and construction, the book follows a sequence of family members rather than a linear timeline. This approach may seem disorienting at first, but once the reader settles in, the structure feels true to the exigencies of memory.

Though the author allows readers to experience her love of and mastery over food, the most memorable moments are those infused with images that may evoke disgust. She depicts, for example, a scene in which her paternal grandmother serves a whole boiled brain for lunch:

"...It looks back with its cool gray fissures and swirls, its light pink blood spots shimmering in the afternoon sun... [Served on] delicate Austrian china that was dragged over on the boat from Czernowitz with her mother's Shabbat candlesticks, my grandmother would feed us whole boiled brains the day after my parents have taken me to see Young Frankenstein at The Zeigfield, where there were brains in glass jars and a man with a moving hunchback and bulging eyes."

Her father’s food message was similarly unappetizing; he would serve up canned ham, spam, and scrambled eggs "overcooked to the consistency of an asbestos mat." The author contrasts her family's aggressively destructive treatment of food with the sumptuous Israeli cuisine enjoyed by her Orthodox neighbors, whose outwardly devout daughter introduces Elissa to psychedelic drugs.

Treyf is an enjoyable study of the contradictions inherent in Altman’s passionate life, vividly capturing the tug of war between religious fervor and open-mindedness, between the laws of kashrut and the lure of crackling fatty bacon. 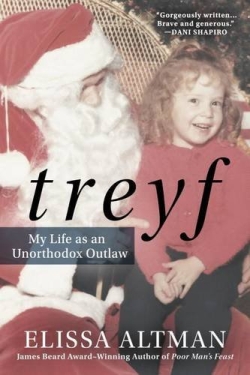