Outraged by the social inequities in her neighborhood of Down River, the 16-year-old Jewish high school student devotes her free time pursuing tikkun olam. She marches and circulates a petition demanding more school funding from City Hall. She attends a rally to preserve the buildings in Down River. "We want City Hall to save our historic neighborhood," she says. "But all they see is a slum that doesn't warrant their attention." And she makes sure that stray dogs get fed.

While protesting for more school funding, she meets Garfield, a new student and Nigerian immigrant. She proudly shows him around the neighborhood, pointing out the synagogue, treating him to a Reuben sandwich at Rosen Brother's Deli, and introducing him to Leibowitz, the homeless dog she has befriended. As she and Garfield get to know each other, they feel the stirrings of romance, but WIllow is distracted by her mother's illness and pulls back from socializing.

A former high school boyfriend of Naomi's, Eddie Nachtberger (rebranded E. Nigma), shows up and secretly offers Willow a solution to their financial woes. "It's not exactly legal. But the pay is ten times minimum wage," he tells her. "And my players are big tippers." Willow ignores her nagging inner voice and agrees to be a game runner for his gambling events.

Beset with doubts, she goes to the Remsen Street Synagogue to sit and think about what to do:

"My mother is observant. I have never been. But I came to the synagogue today. To think. About who I've become. And who I'd rather be. Truth is, E. Nigma owns three illegal casinos. They feed people's gambling addictions and exploit the poor. They funnel money into other criminal enterprises, too. I found this out quickly, but I didn't care. My mom likes this proverb that says, 'A righteous person falls seven times and still gets back up.' But what would getting up even mean for me? Do I have to quit the job? And if I do, what will happen to us?"

Concealing her activities from her mother, Willow pays off their mounting debts. But her involvement in the underworld becomes treacherous. She is attacked first by "Killer Croc" and then by "Poison Ivy" as they attempt to wreak havoc on her beloved neighborhood.

Suddenly, after being attacked by Killer Croc she is left with unsightly scratches on her face as well as new superpowers, specifically communicating with dogs and hearing conversations from a distance. Now disguised as "Whistle," she has the ammunition to fight the evil forces that threaten her and her community.

In this coming-of-age story, the charismatic Willow embodies the menschlichkeit that we want our children to display. Framed as a classic comic book conflict between the forces of good and evil, author E. Lockhart offers plenty to satisfy both teen and adult readers. A bestselling writer of novels, Lockhart says she was approached by DC to invent a new superhero after her thriller Genuine Fraud was published. I am happy to see the addition of this plucky Jewish heroine to the DC comics pantheon and will eagerly follow the next installment of her adventures. 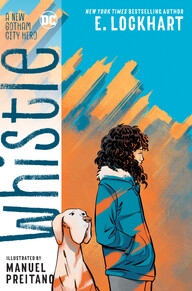