There is a photograph in my study of Prime Minister Yitzhak Rabin shaking hands with me in a crowded Jerusalem hotel ballroom. He is standing ram-rod straight, not making eye contact. To anyone who knew Rabin, his discomfort in social settings would come as no surprise; the former chief of Israel’s Defense Forces could not ever shed his military bearing.

Though Yitzhak Rabin had been one of my heroes ever since he led Israel to victory in the Six Day War, I didn’t know much about him as a person – until now. Itamar Rabinovich’s Yitzhak Rabin: Soldier, Leader, Statesman has given me a better understanding of this complicated man who led Israel during one of the most tumultuous periods of its history. Rabinovich served as Israel’s ambassador to the United States from 1992-1996 and as chief negotiator with Syria in advance of the Oslo peace process.

Born in Jerusalem in 1922, Rabin went to a primary school affiliated with the Labor movement, continued his studies at an agricultural school on a kibbutz, and later graduated from the prestigious Kadoorie Agricultural High School. He served in the paramilitary Palmach during the British Mandate period and fought in the 1948 War of Independence. His talents as a military strategist, his perseverance, and an occasional lucky break led him to the top of the military hierarchy, to the post of Israeli ambassador to the United States, and twice to the position of prime minister.

He reemerged demonstrating a high level of statesmanship, making bold diplomatic moves in pursuit of peace with Israel’s sworn enemies, moves that seemed contrary to his persona as a stern, take-no-prisoners military man. Perhaps most important, he convinced the majority of the Israeli public to support the Oslo Accords, to make the concessions and take the risks that progress toward a peace agreement would require.

The signing of the Oslo Accords put the Rabin government on a collision course with the settler movement and the Likud opposition, led by Netanyahu. His opponents were determined to obstruct the peace process, not only for reasons of security, but also out of a profound belief that this biblical territory was eternally bequeathed to the Jewish people alone. Returning any of this sacred land to the Palestinians would constitute an unforgivable sin.

In political rallies, the opposition depicted Rabin as wearing an SS uniform or Arab headgear. Right-wing extremists denounced the prime minister as a traitor, and radical rabbis pronounced him guilty of transgressions deserving of death. The frenzied campaign to delegitimize and dehumanize Rabin culminated in his assassination on November 4, 1995 at the hands of Yigal Amir, a fanatical 24-year-old law student.

As Itamar Rabinovich points out, everything in Rabin’s life and career happened late. “In his prime, Rabin commanded respect from the public but not its love. After the assassination, the growing warmth turned into an emotional swell of love, admiration, and a profound sense of loss.”

Twenty-two years after his death, Rabinovich and other scholars have sought to demystify the martyred leader. “It is wrong to remember and commemorate Rabin as a dovish leader,” writes Rabinovich. “He was a centrist leader preoccupied with Israel’s security, and he came to the conclusion that the country should seek to moderate and eventually settle its conflict with its Arab neighbors. To him, the quest for peace was ultimately connected with the quest for security. He was willing to make painful concessions, but he scrutinized such concessions through a security lens.” As Henry Kissisnger, Rabin’s friend and admirer, pointed out upon hearing a tribute to a dovish Rabin, “Yitzhak was not a flower child.”

When I look at the photo of our brief meeting so many years ago, I no longer think about his awkwardness in social situations, but rather of his determination and courage – whether as warrior or peacemaker, Yitzhak Rabin was prepared to give his life for what he believed was best for his beloved country.

Yitzhak Rabin: Soldier, Leader, Statesman will be published on March 5, 2017. 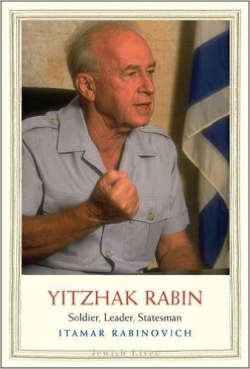