Reflecting recent growth in the quantity and quality of year-round youth engagement, and to ensure that the Union for Reform Judaism (URJ) continues its leadership engaging the next generation in powerful, meaningful, and fun Jewish experiences, URJ Vice President of Youth Miriam Chilton announced today that Michelle Shapiro Abraham, MAJE, RJE has been promoted to Director, Learning and Innovation. The URJ’s Youth engagement initiatives incorporate 60 immersive programs reaching more than 23,000 youth, teens, and young adults.

Rabbi Rick Jacobs, President of the Union for Reform Judaism (URJ), issued the following statement today in response to Israel's Supreme Court statement addressing the Israeli government's failure to implement its earlier decision to create an egalitarian prayer space for non-Orthodox worship at the Western Wall in Jerusalem.

The Union for Reform Judaism (URJ) announced today the creation of the premier non-profit Jewish specialty camp for creative arts. The new URJ camp, called URJ 6 Points Creative Arts Academy, will open in the summer of 2018 in the mid-Atlantic region, and serve several hundred campers in grades 4-11. 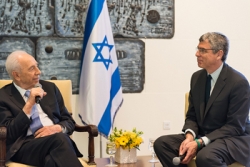 Rabbi Rick Jacobs, President of the Union for Reform Judaism (URJ), released the following statement after learning of the death of former Israeli President Shimon Peres:

In his final speech before the Knesset, as former Israeli President Shimon Peres ended his term in office, he said “I have come to bid you farewell as a citizen, as a man whose dream is still alive.” And indeed, not only did his dreams—and his extraordinary steadfastness, brilliance, and ingenuity—make him an integral part of the nation of Israel from its founding until today, his hope was infectious and his optimism was an inspiration.

Shimon Peres understood that the greatness of Israel lies in its embrace of our better selves, and he spent his life challenging himself and others to reach for the impossible. Often, he achieved it.

We are disheartened, concerned, but, alas, not surprised that Prime Minister Netanyahu’s government today voted to “legalize” illegal Israeli settlements that are built on privately owned Palestinian land. This action makes more difficult the achievement of a two-state solution and significantly undermines Israeli democracy. It is a lose-lose policy.

The Union for Reform Judaism (URJ), the largest, most diverse Jewish movement in North America, launches a new online Introduction to Judaism class, filling a significant need in the North American community for individuals who want to explore liberal Judaism but have no in-person opportunities to study.

In response to the Senate’s vote to confirm Senator Jeff Sessions as the next U.S. Attorney General, Rabbi Jonah Dov Pesner, Director of the Religious Action Center of Reform Judaism, issued the following statement on behalf of the Union for Reform Judaism, the Central Conference of American Rabbis and the wider Reform Movement:

We are deeply disappointed by the Senate’s vote today to confirm Senator Jeff Sessions as the next U.S. Attorney General. As a Movement that has worked for civil rights for over 50 years, we opposed Senator Sessions’ nomination because his record in public life displays an insufficient commitment to advancing voting rights, criminal justice reform, immigration reform, LGBTQ equality, women’s rights and religious liberty, all issues for which we would expect any Attorney General to be a champion.

Following today's press conference with President Trump and Prime Minister Netanyahu, Rabbi Rick Jacobs, President of the Union for Reform Judaism (URJ), which represents the largest segment of American Jewry, issued the following statement. If you would like to speak with Rabbi Jacobs, please contact LTheodore@urj.org or 212-650-4154. Thank you.
We learned today that President Trump “can live with” a one-state solution to the Israeli-Palestinian conflict. With all respect: that was never the question. The question is: can Israelis and Palestinians live with it in a way that allows for a Jewish, democratic State of Israel and realization of the legitimate rights and aspirations of the Palestinians. And the answer to that question remains “no.” Only a two-state solution can achieve the goals of the Israelis and Palestinians.