We join with our Israeli brothers and sisters, the worldwide family of the Jewish people, and friends of Israel everywhere, to mark with joy the 70th anniversary of the establishment of the State of Israel.

Continuing the success of the Union for Reform Judaism’s (URJ) Campaign for Youth Engagement, the URJ announces the Youth Professional Training Fellowship for early career youth professionals in congregations. This new fellowship, funded by a $141,000 three-year Signature grant from the Covenant Foundation, builds on existing URJ professional development programming for adults who work with youth.  Covenant Foundation grantees are Jewish organizations and initiatives with novel and imaginative approaches to Jewish learning and wide geographic reach.

People of conscience everywhere must join us in condemning today’s brutal attack.
Image 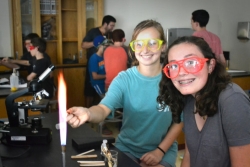 The Union for Reform Judaism (URJ) announces the establishment of a second URJ 6 Points Sci-Tech Academy, with support from a generous grant from the Foundation for Jewish Camp and the Jim Joseph and AVI CHAI Foundations. This exciting new camp will be the URJ’s 18th camp across North America offering young people immersive Jewish experiences within premier camping environments.

Rabbi Rick Jacobs, President of the Union for Reform Judaism (URJ), issued the following statement in response to the Israeli government's announcement of increased settlement building:

Next month, NFTY Convention and Youth Summit participants will gather to learn, pray, and make plans to take action

In response to President Trump’s executive order barring entry to the United States for refugees, immigrants and others from several majority-Muslim countries, the leaders of the Union for Reform Judaism, the Central Conference of American Rabbis and the Religious Action Center of Reform Judaism, issued the following statement on behalf of the Reform Jewish Movement:

“The Reform Movement denounces in the strongest terms the horrifying executive order on immigration and refugees issued late Friday evening by President Trump. The order signed yesterday is even worse than feared, barring entry of all Syrian refugees, imposing in essence a religious test for entry to the U.S., and refusing entry to any individual coming from a list of majority-Muslim nations – betraying even those individuals who have supported our nation's military efforts in Iraq, Afghanistan and elsewhere. Families are now being held apart and countless individuals who have served our nation in the most difficult circumstances are in jeopardy.