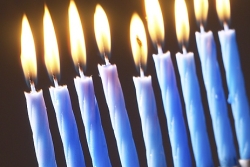 By
Rabbi Daniel B. Syme

The Hebrew word Hanukkah means “dedication” and refers to the joyous eight-day celebration through which Jews commemorate the victory of the Maccabees over the armies of Syria in 165 B.C.E. and the subsequent liberation and “rededication” of the Temple in Jerusalem. 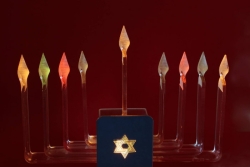 Answered by
Rabbi Julie Zupan
There are certain places that do not permit open flames, including hospitals, nursing homes, and dorm rooms. What should Jews in these spaces do for Hanukkah?
Image 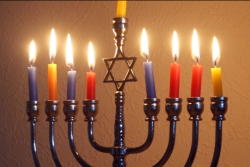 A menorah refers to a candelabrum, usually one with seven branches. 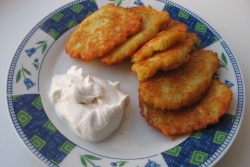 A common explanation is that we eat latkes (potato pancakes) because they are cooked in oil and this remind us of the miracle that a single cruse of oil found in the Temple lasted for eight nights. 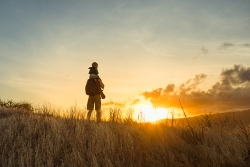 Recite this blessing the first time you do something each Jewish calendar year (e.g., the first night of Hanukkah when you light the menorah), and to mark joyous occasions.

This time of year, it’s hard not to be drawn into conversations about the place of religious expression in public life. Christmas decorations abound, and religious minorities play up the celebration of a winter holiday to stake out a place in their communities. There is always a conversation about how important Hanukkah is in the Jewish tradition, probably a result of the effort I described to feel represented in a community or society where there is a widely-celebrated religious holiday. Often, communities, local governments – particularly schools – also struggle with this question of representing different religions. The December Dilemma, as it is often called, describes the often uncomfortable conversation parents, students and other community members have to have about how not to make people feel alienated in their community.
The holiday of Hanukkah celebrates the victory of the Maccabee resistance over the Syrians led by Antiochus Epiphanes. The Syrians had taken over Jerusalem, desecrated the holy Temple, abolished Judaism, prohibited observance of Shabbat and the Festivals, in addition to outlawing critical Jewish rites like circumcision. The Jews were given two options by Antiochus, conversion or death. The first night of Hanukkah -- 25 Kislev -- commemorates the day the Temple was renamed for the Greek god Zeus, and the resistance movement led by the Maccabees developed. The Maccabees, led by Mattathias and Judah, ousted the Syrians and restored Jerusalem to the Jewish people.

Green Kislev and Hanukkah Challenge to Use CFL Light Bulbs

Welcome to December and the Jewish month of Kislev! Hanukkah, the Festival of Light, is just around the corner and as the days shorten towards the winter equinox later this month, it seems fitting to focus on how we light our houses for this month’s Green Challenge.
As we approach the joyful holiday season, it is important to remember the challenges that so many across the world continue to face. Malaria, which is transmitted from the bite of a single mosquito, causes 200 million illnesses per year and kills more than 600,000 people, most of whom are children under the age of five. Jewish tradition teaches us that human life is sacred because all of humanity is created b’tselem Elohim, in the image of God (Genesis 1:26). Thus, we must make sure to treat each life with equal value, and fight this disease that is both treatable and preventable.
I get asked a lot if I’m “half.” Often, people are referring to my mixed Caucasian and Asian American heritage, their curiosity sparked by my Korean last name on my Jewish business card or by whatever other seeming tip arises on a given day. Other times, particularly as the holidays overlap in December and my family brings out our menorah alongside our Christmas tree, people ask whether I’m “half Jewish,” assuming my dual holiday celebration must mean some part of me is not Jewish. They couldn’t be more wrong.