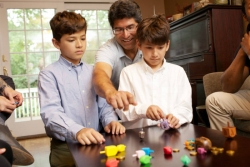 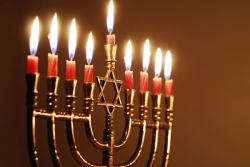 A menorah is a candelabra, and can be used for Hanukkah if it has nine stems. Another word for a Hanukkah menorah is hanukkiyah. A hanukkiyah has one stem for each of the eight days of Hanukkah, and one for the shamash, or “the helper candle” that is used to light the other candles. Candles are added each night from right to left and they are lit from left to right. 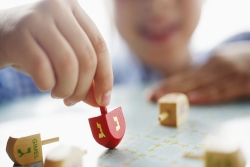 The word dreidel derives from a German word meaning “spinning top,” and is the toy used in a Hanukkah game adapted from an old German gambling game. Hanukkah was one of the few times of the year when rabbis permitted games of chance. The four sides of the top bear four Hebrew letters: nun, gimmel, hey, and shin. Players begin by putting into a central pot or “kitty” a certain number of coins, chocolate money known as gelt, nuts, buttons or other small objects. 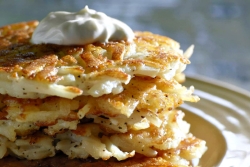 A latke is a potato pancake fried in oil, and is a traditional food eaten to celebrate the miracle of the oil in the story of Hanukkah. Foods cooked in oil serve as a symbol of the legend of the jar of oil that lasted for eight days. 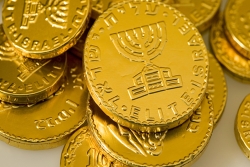 Gelt is chocolate coins given to Jewish children on the festival of Hanukkah. They are usually wrapped in gold foil, and their history can be traced back to the decision of the Hasmoneans to mint their own nation’s coins after their military victory over the Greek Syrians. Gelt is often used to gamble with in the game of dreidel. 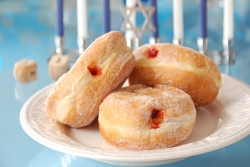 Sufganiyot are donuts, usually jelly-filled, that commemorate the miracle associated with the oil that burned for eight days in the Hanukkah story. Foods cooked in oil are traditionally eaten during Hanukkah. 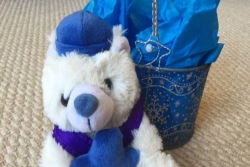 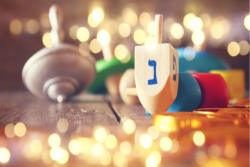 In today’s world that doesn’t feel quite festive, can I get myself into a celebratory mood for Hanukkah? 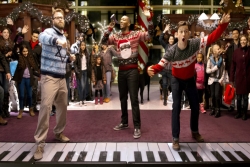 Making sweaters is a complicated business. It’s hard to get a business off the ground. But one Jewish sweater maven managed to get it done. 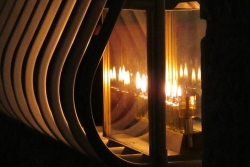 Though our kids have a long list of things they want for Hanukkah, we try to navigate the week-long celebration, balancing gifts, donations, and experiences.