Displaying 1 - 6 of 6
Many workers look forward to the day they can retire and spend their days relaxing rather than working for the remainder of their lives. Unfortunately, many LGBT people do not have this luxury. Due to a lifetime of discrimination, older LGBT people face a variety of challenges at much higher rates than their straight peers.
After a summer of victories for marriage equality, the Supreme Court today denied review of all of the seven petitions challenging state bans on same-sex marriage, thus allowing federal district and circuit decisions – which struck down marriage bans in Indiana, Oklahoma, Utah, Virginia and Wisconsin – to go into effect shortly. Same sex- marriages began at 1:00 PM today in Virginia and state agencies in Utah have all been told to begin recognizing all legally performed same-sex marriage today.
If you’re a Supreme Court fanatic like I am, you’ve been eagerly awaiting the start of this year’s term for months (well, since early July). It’s finally here. I’m excited to begin following the justices again, although I'm a bit nervous for possible case outcomes this year given the Court’s recent decisions. Even if you haven’t been counting down the days, you should consider keeping up with the Court this year exactly because its recent decisions and upcoming cases are so critical. As we saw in cases like Citizens United and Shelby County v. Holder, which invalidated Section 4 of the Voting Rights Act, the Court can shape law and spark national debate in a profound way. The cases the Court will hear this year promise to do the same:
Donald C. Cutler is the Co-Chair of the Reform Jewish Voice of New York State (RJV) Steering Committee.  He is a former Legislative Assistant.
Image 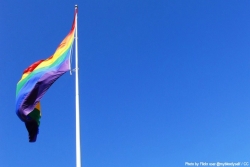 October is LGBT History month, dedicated to celebrating the history of lesbian, gay, bisexual, and transgender individuals and the LGBT equal rights movement.

This week marks the beginning of LGBT History month, dedicated to celebrating the history of lesbian, gay, bisexual and transgender individuals and the LGBT Equal Rights Movement. Although the LGBT Equality Movement’s most significant victories have occurred in the past decade and a half (sodomy laws which criminalized same-sex sexual conduct were only declared unconstitutional in 2003!), the Reform Movement has a long and rich history of fighting for LGBT Equality. In fact, our Movement was advocating for LGBT equality long before it became a mainstream equality movement.