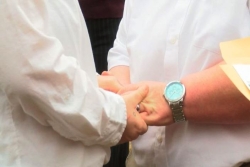 As we get closer to the much-anticipated oral argument in the marriage equality cases coming out of the Sixth Circuit Court before the Supreme Court, the fight for marriage equality within states wages on. On January 23, Federal District Court Judge Callie V. S. Granade ruled that that Alabama’s ban on marriage equality was unconstitutional. Yet, in the weeks following the court ruling, many counties refused to offer marriage licenses to same-sex couples following a February 8 order by the chief justice of the Alabama State Supreme Court, Roy S. Moore who stated that state court probate judges are “not bound by any rulings of the Federal District Court.” On the same day (February 9) that counties started refusing to provide marriage licenses to same-sex couples, the Supreme Court refused to halt same-sex marriages from starting in Alabama.
Last month, the Human Rights Campaign and the Equality Federation Institute released their 2014 State Equality Index (SEI), which analyzes the state of LGBT rights in all fifty states and the District of Columbia. Although the fight for marriage equality is often in the headlines, this report highlights the many other laws that impact LGBT people, for better and for worse. Ultimately, while 2014 included many victories for LGBT people on the state level, there is clearly much more that needs to be done in order to achieve full equality.