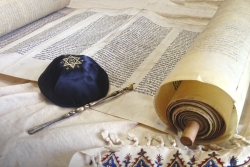 To celebrate the 100th anniversary of women’s suffrage in the United States this year, Rabbi Carole Balin, Ph.D., is sharing eight chapters of an "alternative Book of Numbers” designed to tell the stories of Jewish women who combined civic engagement with Jewish values in a 40-year struggle “

Oy! There's a lot of whining in this week's Torah portion, B'haalot'cha.

This week brings us Yom Y'rushalayim (May 8 / 28 Iyar), one of several Jewish holidays commemorating events of war in the modern State of Israel. This one recalls Israel's "recovery" of the Old City of Jerusalem during the Six Day War in 1967.

The sign read, "We've got to stop it," and under it a woman sat alone at a table in the grocery store parking lot. The sign also contained the words "domestic violence," so I walked over. She greeted me warmly, "I'm trying to put a face to it. To say it could happen to anyone.

This year marks Justice Ruth Bader Ginsburg's twentieth anniversary on the United States Supreme Court. Justice Ginsburg likes to tell her version of a story that has many versions: 1

The Reform Movement has been advocating for LGBTQ+ rights since 1965, when the Women of Reform Judaism (WRJ) called for the decriminalization of homosexuality. Since then, substantial progress has been made in pursuit of LGBTQ+ equality: the 2009 passage of the Matthew Shepard Act expanded US Federal Hate Crime Law to include crimes motivated by a victim’s actual or perceived gender, sexual orientation, or gender identity; the US Senate repealed the “Don’t Ask, Don’t Tell” policy in 2010, allowing LGBTQ+ people to serve openly in the military; and in 2015 the Supreme Court declared same-sex marriage legal across all 50 states in Obergefell v. Hodges. Despite these gains, gaps in US federal nondiscrimination law omit the LGBTQ+ community from protection against discrimination in employment, housing, health care, and others. We must continue to advocate until the LGBTQ+ community is treated with full equality and dignity in society and under law.