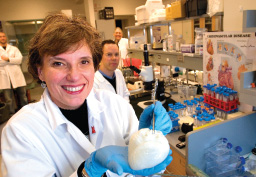 In January 2008, Dr. Doris Taylor and her colleagues at the University of Minnesota's Center for Cardiovascular Repair took the heart from the cadaver of a rat and injected it with stem cells, bringing it to life-and making history. She spoke with Krista Tippett, host of Krista Tippett on Being (American Public Media).

Krista Tippett: You've said that opposition to stem cell research is inflamed, in part, by a misunderstanding of the facts.

Dr. Doris Taylor: Yes. Stem cells are everywhere in our body and can do two things: either make more of themselves, in other words self-renew; or "differentiate," become a lot of different things. The fear that we're using fetuses to create cells for medicine is just not true.

Fetal cells are not stem cells anymore. They're too old-they've already developed into a given tissue or organ, whether that's muscle, heart, etc. We use embryonic stem cells, which come from a fertilized egg before any of this differentiation occurs. These eggs were donated to research after they were no longer needed for in vitro fertilization; otherwise they would go in the trash. In addition, a number of these eggs have genetic diseases and would never have been implanted. Wouldn't it be fabulous if we could understand how an adult develops heart failure by studying such cells?

Tippett: Some foes of stem cell research equate it with abortion.

Dr. Taylor: Yes. They are under the false impression that the stem cells we use come from aborted fetuses. In my experience, when you speak with someone whose child or brother or sister or mother or father has a disease, and explain what's really happening, the person starts realizing: This is another tool to use for healing. It is my personal moral belief that the universe gives us such tools to use, and I can't turn my back on the wonderful opportunity to learn how nature builds things.

Tippett: When was this healing tool first used?

Dr. Taylor: The first "cell therapy" happened in Minnesota in the '60s. We would harvest bone marrow, and when somebody had cancer we would wipe out their bone marrow and give them new bone marrow. We used to think that we were just giving them the cells to make new blood; now we know that bone marrow is full of stem cells. Essentially, science has caught up with what nature has been doing all along: making sure we have the cells that can repair our organs and tissues.

Tippett: What is the connection between aging and stem cells?

Dr. Taylor: For most of our lives, our bodies repair themselves because our organs and tissues have stem cells that take care of normal wear and tear. As we age, our stem cell count goes down and the functioning of those we have decreases. Aging is really a failure of stem cells. That's why when we fall down and scrape a knee at age 72, we may have a scar the rest of our life.

Tippett: How do genetic and lifestyle factors affect stem cells?

Dr. Taylor: We know that men and women have different numbers and different kinds of stem cells. Men develop heart disease earlier than women-perhaps because they lose their stem cells faster. Scientific evidence also shows that decreasing stress increases the number of stem cells in your blood.

Tippett: How does stress impact the body?

Dr. Taylor: On the end of each chromosome of a cell is a little piece of DNA called a telomere. Every time your cell divides, the telomere gets shorter. When it reaches a certain point, it says, "Oops. I'm old. Time to die." Stress makes that piece of DNA get shorter faster, literally aging your stem cells.

Tippett: Is it possible to make cells younger by reducing stress?

Dr. Taylor: Some experiments looking at that are underway right now. What I can tell you is that meditation has an effect on the number of stem cells in the blood. Matthieu Ricard, a French philosopher Buddhist who's worked with the Dalai Lama and is now doing meditation brainwave studies at the University of Wisconsin, graciously let us measure cells in his blood before and after meditation. We discovered a huge increase in the number of stem cells in his blood-and only after 15 minutes of meditation!

I also believe-although at present I have no data to support this-that we will find a connection between cancer and stem cell research. Cancer is basically cells gone bad-cells that no longer know when to stop dividing. A stem cell can self-renew-make a lot of itself, keep dividing, and become many different things. Very similarly, a tumor cell can also make a lot of cells and become many different things-but a stem cell has signals that know when to stop dividing, whereas tumor cells do not. I believe that in some ways cancer is nature's attempt to replenish that stem cell pool as we get older. As we start running out of stem cells, more and more cells have to divide to replenish the pool-and if something goes bad, then you get a tumor. Can I prove this? No. But we do know that some cancers come from stem cells and that metastases, the things that spread, are often stem cells.

Tippett: Meditation, then, can kick in your body's regenerative, reparative powers?

Dr. Taylor: I believe that inflammation is nature's cue to say, "Send me cells." Meditation, I'd say, is essentially doing that without the inflammation. It's nature's way of sending those cells to the sites where you need them, a way to turn down the negative aspects of stress, which affects aging. And if you don't believe stress ages someone, look at a president before and after he's been in office for four years.

Tippett: What would you say to someone who asks, "How far should we strip-mine humanity in order to save it?"

Dr. Taylor: I would say, "Go spend a week in a pediatric intensive care unit or with kids struggling to learn how to sit up at age 14, and then talk to me about what you think are the right approaches." In my spiritual world, it would be inhumane to turn my back on a parent who calls me and says, "My child was born with X, Y, and Z. Can you help me?"

I understand this firsthand; I grew up with a twin brother who has cerebral palsy. Many of the people who don't believe in innovative approaches to medicine have a change of perspective when it's their daughter or son or brother who needs that help. Then all of a sudden they're open to the conversation.