Tashlich: Into the Deep 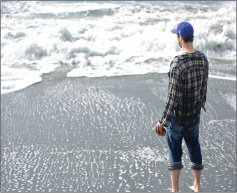 High Holidays services came and went, and I missed them. The New Year had barely begun and already I had this serious transgression on my 5770 scorecard. Tashlich would be my chance to rectify my wrongs, so it had to be done right: I'd go to Ocean Beach and purge my sins in the Pacific. But before, I would read up on the ritual to make certain I would not err again.

From Wikipedia I learned that the Tashlich ritual may have been derived from a line in the Zohar: "Whatever falls into the deep is lost forever…it acts like the scapegoat for the ablution of sins." At the edge of the continent I would materialize my sins as bits of bread and submerge them for all time.

With that in mind, I entered the Safeway across the street and bought a roll. Fifty-nine cents for a clean slate - what a religion! Stepping back out into the grainy fog of a San Francisco afternoon, I hopped the L line towards the ocean.

The sea, frankly, looked pissed. Rows of waves galloped towards the shore like a front of horse-drawn chariots plunging into battle. Holding my roll like David held his rock, I vowed to tear it apart and submerge the pieces into the goliath deep. I took off my shoes, rolled up my pant legs, marched into the water, and planted myself shin deep to contemplate my sins. There were many to reflect on: disloyalty, indolence, lust, misplaced lust, weak convictions, covetousness, taking my loved ones for granted, speaking ill of others… Meditating on one at a time, I calculated its relative weight and ripped a piece of bread, its size corresponding to the gravity of the respective wrong. And it felt freeing.

But the feeling was fleeting.

The seagulls caught on quickly. A flock of them noticed my sins floating on the water, took to the air, swept down, and promptly devoured them.

I tried to outwit them. I faked left and threw right. I crumbled tiny bits of bread in my hand and released the flakes unassumingly at my side. But for the most part the gulls were not tricked. True, they didn't really notice the crumbs I deposited beside my ankle, but this left me little satisfaction. I wanted to be bold and dramatic-to hurl my sins into the mighty sea.

Then I thought about Wikipedia's explanation of the origin of Tashlich. How could I possibly get my symbolic sins to sink deep? Even if they escaped the gulls' bills, surely the fish would get to them. And, when last I checked, bread floats.

This was not the first time I had approached the sea at the dawn of the New Year to seek absolution for not being the kindest and most pleasant version of myself. Yet nothing had changed. I still failed, from year to year, to consistently call my mother. In that case, did my efforts at absolution really matter? Why participate in Tashlich at all if it is more a cosmetic cover-up than an opportunity to be transformed?

Then, suddenly, while standing there in the ocean, white thighs exposed, cursing the seagulls, I realized the true meaning of that passage from the Zohar. I was approaching it all wrong. Tashlich isn't so much a deus ex machina (contrived solution) as a challenge from God. To truly lose our sins in the deep we must, each of us, plunge into the depths of our own souls. We must don scuba masks and flippers and absurdly large oxygen tanks and swim down towards the cold and unforgiving darkness inside ourselves. If this sounds abstract, it is; our paths to absolution are all too unique and lonely to be expressed uniformly with any specificity. They are also all incredibly difficult and frightening.

We should continue to throw bread at water on Tashlich. Ritual, at its core, enables us to connect on a physical level with a spiritual idea, to guide our thoughts from the motion of the ritual itself to the teaching it embodies. As such, the ritual itself does not bring instant absolution of sins. To go beyond the annual exercise of thinking about the bad things we've done, we need to have the strength, the will, the determination, and the oneness of mind to swim into the darkness and sink our sins lower and lower until we know for certain they are lost forever. And then, gasping for air with pounding hearts, we will hopefully break above the surface, stronger, purer, wiser than before.

Russ Levine is a student at San Francisco State University.