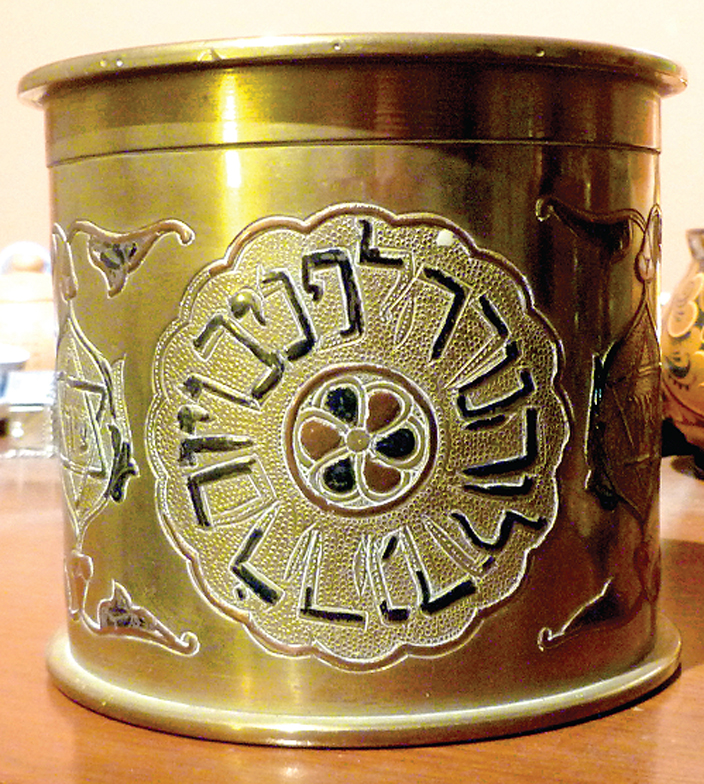 Two great uncles of mine fought in then Palestine during WWI and brought back pieces of trench art as souvenirs. I'd love to know more about them.

The main piece (shown here) is made from a spent German 90 millimeter artillery shell-mostly brass with a thin layer of applied silver and copper.

Such work is known as Damascene, because the art was started by Jewish and Arab metalsmiths in Damascus, Syria toward the end of the 19th century. Damascenic work became popular during the World War I period. Cartridges like this were found in the field, having been left behind by English soldiers.

Your pieces were probably made by Syrian Jewish metalsmiths around the time of the British conquest of Jerusalem in 1917. The Bezalel School of Art, founded in 1906, created a Jewish style of art combining elements of art deco, art nouveau, and other movements then in vogue with traditional Middle Eastern designs. Your pieces, however, are not Bezalel creations, as their inscriptions do not bear the clear, near perfect Hebrew associated with the school.

I own 12 such shells myself.

Based on past sales, your Damascene containers would sell for $500-$600 at auction.

Thank you! I find the combination of Arab and Jewish art and inscriptions fascinating, and thank my uncles for bringing back such unusual souvenirs. I wish Arabs and Jews could still work together to create beauty!

Discover the value of your antique Judaica. Contact Jonathan Greenstein at jgreensteinco@aol.com. You may see your story in a future RJ magazine.