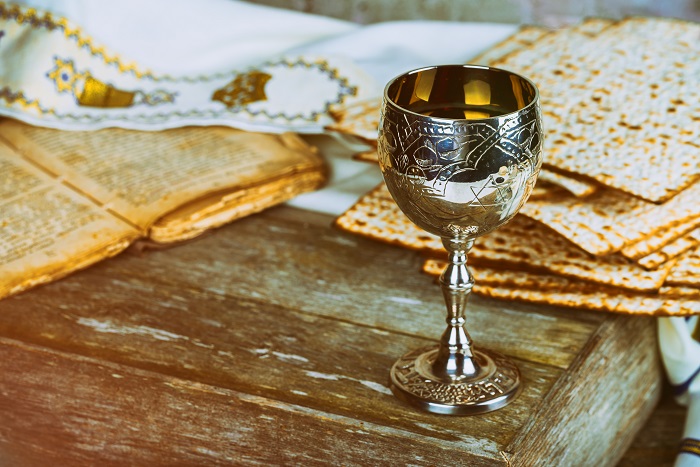 Ask virtually anyone: “Was Jesus’ Last Supper a Passover seder?” and the response is likely to be “Of course!” Yet, Jesus could not have known what a sedersederסֵדֶר"Order;" ritual dinner that includes the retelling of the story of the Israelite's Exodus from Egypt; plural: sederim. was, let alone have modeled his Last Supper after one.

The elements of even the primitive seder originated decades after he died. The Gospels date Jesus’ ministry to the period of Pontius Pilate, Roman prefect of Judea from 26 C.E. to early 37 C.E. Jesus’ year of death is unknown; scholars settle on between 30 and 33 C.E.

At that time, the core element of Passover observance had been Jerusalem’s sacrificial cult, from 621 B.C.E. until the destruction of the Second Temple in 70 C.E. Jewish families brought paschal (Passover) lambs for sacrifice on the Temple altar by the kohanim (priests) as biblically prescribed: “Thou shalt sacrifice the Passover offering…in the place which God shall…cause God’s name to dwell [Jerusalem’s Temple]” (Deuteronomy 16:2, 5–6). Families then retrieved and consumed their meat as the main part of their Passover meal, which also included unleavened bread and bitter herbs (recalling the Hebrews’ enslavement in Egypt).

Passover meals Jesus experienced in his lifetime would have had to be along these Temple-centered lines.

After the destruction of the Temple, the early rabbis eventually introduced an inchoate, rudimentary practice that over the ensuing decades evolved into a new way of observing Passover. This would become known as a seder, Hebrew for “order,” because the ceremony followed a set sequence of liturgical recitations and ritual foods narrating the Passover saga, ultimately to be governed by an instructional guide called the HaggadahHaggadahהַגָּדָהLiterally, “telling.” This is the Jewish text that sets forth the order of the Passover seder. Plural: Haggadot.  .

In our oldest reference, the early third-century rabbinic compendium, the Mishnah,MishnahמִשְׁנָהLiterally “repetition.” Mishnah is a Jewish legal code edited by Rabbi Judah HaNasi in Palestine in 220 C.E. It is the first Jewish legal literature after the codification of the Hebrew scriptures around 90 C.E. Also called “Torah Shebal Peh,” “Oral Torah” or “Oral Law.” we read that Gamaliel II, the greatest rabbi of the post-destruction era (likely during the late 80s C.E.), customarily said: “Whoever does not mention [expatiate upon] these three things on Passover does not discharge one’s duty...: the Passover offering [lamb], unleavened bread, and bitter herbs” (Pesahim 10:5).

Thus, the core Temple-centered observance mutated from sacrificing lambs into drawing upon Passover motifs to retell the Hebrews’ escape from Egypt. Centuries of further embellishment and refinement produced the full-fledged, mature seders we know today—the kind that many modern churches adopt and adapt in “reenacting” the Last Supper, even though no such seder could have been practiced during Jesus’ day.

If the Last Supper could not have been a seder, what led to modern-day associations of the two? Early Christian theology contended that the primary purpose of the Jewish Bible was to signal Jesus’ coming. The Passover saga thereby became a major filter for heralding Jesus’ uniqueness.

In the 50s C.E., Paul of Tarsus wrote of the “sacrifice” of Christ, “our paschal lamb,” urging Christians to avoid the “leaven of malice and evil” in favor of “the unleavened bread of sincerity and truth” (1 Corinthians 5:6ff.). In 71 C.E., in the wake of the Temple’s fall, Mark (followed by Matthew ca. 85 and Luke ca. 95) reimagined Jesus’ Thursday night Last Supper (ca. 30 C.E.) as having been a Passover meal, most likely to correlate Passover, the festival of physical and political freedom for the Jews, with Jesus’ death, which Christians claimed brought spiritual freedom, indeed salvation, for humanity.

John, meanwhile, preferring to interpret Jesus himself as the paschal lamb, set that Passover meal on Friday night, 24 hours after Jesus’ Last Supper, so as to coincide Jesus’ death with that of the Passover lambs sacrificed shortly before that Friday evening’s Passover meal. Thus, various Gospel writers embellished Last Supper narrations with their own preferred Passover motifs in service to Christian theology.

Once the seder became imported into churches, the pendulum swung disturbingly too far.

Passover was now transformed into an overtly Christian celebration, wherein Jewish haggadot were photocopied and repackaged with insertions of a Christological nature blatantly contrary to original rabbinic intent. Such fanciful notions included the death of the firstborn foreshadowing the death of Jesus (God’s firstborn); the lamb’s blood on wooden doorposts of Israelite homes in Egypt anticipating Jesus’ blood on the wooden cross; the passing through the Red Sea heralding the sacrament of baptism, the Red Sea so named because of the saving blood of Jesus; the three pieces of matzah matzahמַצָּהUnleavened bread eaten during the seder that symbolizes the hurried departure of the Israelites from Egypt. Eating matzah is obligatory only at the seder. During the rest of Pesach, one may abstain from matzah as long as all chametz is avoided; plural: matzot (centered on the table) representing the Trinity; the breaking of the middle matzah, recalling the breaking of the body of Jesus (second person of the Trinity); the stripes on the matzah reminiscent of the lash marks from Jesus’ whippings; and the matzah’s tiny perforations recalling the stigmata piercing Jesus’ hands, feet, and side.

Rabbi Michael J. Cook, z"l, who died on March 30, 2021, served as the Sol and Arlene Bronstein Professor of Judeo-Christian Studies at the Cincinnati campus of Hebrew Union College – Jewish Institute of Religion until his retirement in 2019. He was the author of Modern Jews Engage the New Testament: Enhancing Jewish Well-Being in a Christian Environment (Jewish Lights Publishing). This article was adapted from Reform Judaism magazine (Spring, 2013)