What Works: Co-creating a Bat Mitzvah Tallit: The Ties that Bind 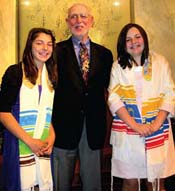 "I couldn't imagine all the good that would come from my simple request," says Naomi Ruben.

Her daughter Claire was becoming a bat mitzvah at Cincinnati's Isaac M. Wise Temple, and Naomi wanted to involve her own parents/Claire's grandparents in the experience leading up to the celebration. But how could they, living 1500 miles away? She wrote them a heartfelt invitation: Could they find a way to connect with Claire as she prepared for her special day?

A chemist by training, Claire's grandfather Mel Gallant, a member of Aspen Jewish Congregation in Aspen, Colorado, had discovered his artistic side later in life. In his 40s he taught himself to sculpt and created life-like head sculptures of several family members. After his "clay" period, he tried his hand in oils; later, Rya rugs (a number of his abstract rug designs won awards at local art shows); and then abstract wooden sculptures (now sold to collectors). Committed to continuing his artistic growth and nurturing his relationship with his granddaughter, Mel called Claire and offered her a choice: he would purchase a bat mitzvah tallit of her choosing, or he would collaborate with her on designing her own tallit that she could proudly wear during her bat mitzvah service.

A stunned Claire accepted the invitation to collaborate with her grandfather. As for Mel, after he hung up the phone, he said to himself, "What have I done? I don't know how to make a tallit! What do I do now?"

He spent months reading and testing different dyes and paints until he was able to paint silk consistently with sharp edges. Claire asked that the stripes in her tallit be colored blue (symbolizing the second day of creation, when the "waters above" were separated from the "waters below"), green (representing the third day, the creation of vegetation), and brown (meaning the Earth); and grandfather and granddaughter worked together on their width and placement. Mel painted a picture of Jerusalem for the atarah (collar) per Claire's request, and designed a Star of David and Claire's Hebrew name, which were embroidered on a reinforcing square at each of the inside four corners. Meanwhile, Claire studied the methods and prayers of how to tie the tzitzit. When the tallit arrived, Claire carefully made the proper knots, reciting the blessing each time. And on the day of her bat mitzvah, she wore her co-created tallit with pride.

Inspired by the experience, Mel co-created a tallit with another grandchild, Alicia, for her bat mitzvah service at Congregation Keneseth Israel in Allentown, Pennsylvania. And for the wedding of Naomi's brother Lawrence and his fiancé Amy, he co-created with them a chuppah displaying a Star of David bordered by flowers.

"I feel a strong sense of accomplishment and quiet pride at having made three art pieces with so much meaning to my granddaughters, my son, and me," Mel says. "I extended my presence in Claire and Alicia's lives, bonding with them in a way that words alone would not have done- and they will feel my loving caress whenever they put on their tallit. And I incorporated Lawrence and Amy's joy and love for each other into the chuppah. I visualized the future and saw their children standing under it. I had a sense of immortality."