What You'll Need at a Jewish Wedding 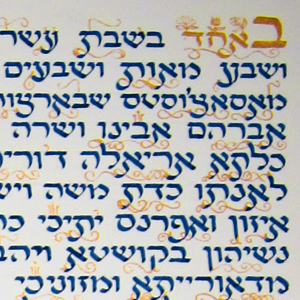 A chuppah is a wedding canopy that symbolizes the home the couple will establish and under which they and family stand during the wedding ceremony. Originally, wedding ceremonies were held outdoors in the hope that the marriage would be blessed by as many children as "the stars of the heavens." Some kind of covering was employed to create a more modest and sanctified space, separated from the "marketplace." The chuppah can be a plain tallit or velvet cloth supported by four poles that can either be freestanding or held by family members or friends. A chuppah also can be covered in flowers or created with fabric that is meaningful to the couple.

Prior to the wedding, the couple should decide what type of chuppah they will use, whether someone will make it or whether they will use one (if available) from the synagogue or other venue where the wedding will be held. If a freestanding chuppah is to be used, the couple also should decide who will be invited to hold the poles during the ceremony.

Regardless of the type of chuppah selected, it should be a temporary, handmade structure, although there are no halakhic requirements about its dimensions, shape, or decoration. The temporal, almost fragile nature of the chuppah reminds us that relationships too can be fragile and, from time to time, may need the support of loved ones.

One custom dating to ancient times indicates that when a boy was born, a cedar tree was planted. At the birth of a girl, an acacia tree was planted. When the children grew up and were to be married, the poles with which to support their chuppah were made from those very trees. Today, especially in Israel where cedar and acacia trees are plentiful, this ancient custom is preserved.

The ketubah is one of the oldest and at one time was one of the least romantic elements of Jewish weddings. A traditional ketubah is a legal contract written in Aramaic and signed just prior to the wedding ceremony by two male witnesses who testify that the groom "acquired" the bride in the prescribed manner and that he agreed to support her. Sensitive to the male-oriented language of the ancient document in light of contemporary values, many modern ketubot are egalitarian, and include wording indicating that both spouses make the same commitments, one to the other. Written in Hebrew and English, rather than legalistic, modern ketubot are spiritual. They often include descriptions of how the couple will support each other and the Jewish home they are establishing. Ketubot are often beautiful pieces of art hung in places of honor in the couple's home. Ketubot may be obtained from artists and calligraphers, either pre-printed or as one-of-a-kind designs. Today, both men and women, serving as witnesses (and often the bride and groom as well), sign the document.

A groom giving a bride a valuable token while saying prescribed words in the presence of witnesses has been a mainstay of weddings for millennia. In a Jewish ceremony, the groom placed a ring (sometimes ornate, highly stylized and specifically for the ceremony itself) on the bride's index finger, and said in Aramaic, "Behold, you are consecrated to me with this ring, according to the laws of Moses and Israel." Until the modern period, the words and actions were unilaterial; the bride did not give the groom a token and did not make a verbal pledge.

Today, both partners can choose to give each other a token, and the choice of tokens has broadened considerably. Some rabbis will require that couples use a ring of one solid piece of metal, while others will accept any style of ring or any other object as the official token. The only limits are those set by your imaginations, tastes, and the customs of your communities, so be sure to consult with you rabbi.

Are you searching for an officiant for your wedding? Complete this form to be connected with clergy who fit your wedding needs. Mazel tov and best of wishes!