When Jack Pushed Jill Down the Hill: Coping with Bullying 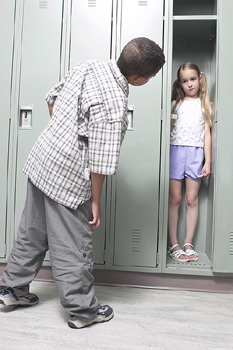 Joy Weinberg, managing editor of Reform Judaism magazine: "Why are children so often mean to each other?"

Rabbi Edythe/Edie Mencher, cclinical social work psychotherapist, author, organizational consultant: They may be feeling angry, competitive, insulted, irritable, envious-the same reasons adults behave unkindly. They may have been ridiculed at home or school. They may not have developed impulse control or benefited from years of socialization; very young children in particular do not appreciate the consequences of their actions. They may compensate for poor language skills by hitting or saying, "Dummy!" Sometimes bullying is rewarded with popularity. And "wiring" makes a difference: Some kids have more difficulty understanding other people's feelings and tend to be more aggressive and impulsive.

If one sibling is aggressive with another, consider the possibility that the larger family may be inadvertently playing a role their interactions. In the biblical story, Joseph's brothers not only resented his grandiose prediction that he would rule over the family, but envied the special treatment their father Jacob afforded Joseph. And because Jacob both provoked feelings of anger and hurt in his sons and did nothing to help them appropriately channel their emotions, it came to pass that Joseph's brothers sold him into slavery.

Aron, editor of Reform Judaism magazine: "How should parents respond if one of their children bullies another?"

Edie: When it comes to hostility between kids, quantity and degree count. If adults intervene in every squabble, children will not learn to fend for themselves. On the other hand, letting a child hit or say cruel things to a sibling without intervention leaves the hurt child feeling unsafe. The victimized child must know that her suffering matters to those in authority and that her cry will not be ignored.

In situations involving dangerous behavior, take a firm moral stance: Tell the child who has injured a sibling that "hurting another person is not allowed" and work with her to develop other ways of handling her frustrations. Avoid shaming and belittling the offending child, which will only compound the problem by modeling the very behavior you wish to discourage. Also refrain from suggesting or implying that the wounded child is more vulnerable or precious, as you're liable to diminish her confidence and incite more hostility toward her. At every opportunity, try to reinforce the idea that each child is treasured, everyone makes mistakes, and the wellbeing of the teased and the teaser are of equal concern.

Also, consider how you might redirect a child's aggressive tendencies in positive ways. According to Jewish tradition, all human beings are born with both a yetzer hara, an inclination toward evil, and a yetzer hatov, an inclination to do good. Judaism does not expect us to blot out the yetzer hara - Genesis Rabbah 9:7 teaches: "Were it not for the evil inclination, men would not build homes, take wives, have children, engage in business" - but to balance it with the yetzer hatov. The yetzer hara of a fiercely competitive child can be channeled into sports, debate club, or other activities where winning is celebrated.

Aron: "What should be done if your child is being bullied at school?"

Dr. Dale Atkins (psychologist, author, TV commentator, Reform congregant): All manners of bullying are wrong, whether they're verbal (name calling, threats), psychological (making a child feel vulnerable by exclusion or other mind-game tactics), or physical (shoving, hitting, kicking, punching). Commend a bullied child for seeking help and assure him that doing so is not a sign of weakness but of strength and confidence. Explain that the bully may be acting out of jealousy or intolerance of people who are different. To help the bullied child build his inner strength, ask him to imagine he's wearing a coat of armor and carrying a shield to ward off the "arrows" coming at him in the form of hateful words. Keep reminding him about his strong and decent qualities. Encourage him to do the things he enjoys and is good at, and to spend more time with friends who support him.

If the problem at school is severe, you might also ask the teacher or principal to call a meeting with the families of the children and enlist everyone involved in resolving the situation.

Edie: A child also needs to be told that he shouldn't let pride compel him to take on the bully physically, especially if he's liable to get hurt.

Joy: "How can a child defend against physically stronger bullies?"

Dale: Self-defense classes can be helpful. Most martial arts programs these days focus on using the mind to deal with the opponent: The strength comes from within. The child isn't being encouraged to fight, but rather to feel unafraid. Children who are perceived as "weak" are often targets, and it is important to help them feel competent.

Aron: I was physically bullied in junior high school until I pushed my tormentor down a flight of stairs. While my action might have caused him serious injury, it stopped him from messing with me again. Since that time, I've believed that the best way to stop a bully is to fight back.

Edie: Sometimes there is no other choice, but in general, it's best to avoid physical confrontation because violence begets violence and conflicts tend to escalate. While Judaism does not encourage pacifism in the face of assault and an obligatory war is part of our tradition, it is still our hope that children should not have to experience day-to-day life as a battlefield. Martial arts training may help, as a child who projects internal strength and confidence may be less likely to be pushed around. Engaging in extracurricular after-school activities may also prevent the child from continuously encountering threats and feeling unsafe. If violence persists, you may need to involve school officials and even legal authorities. It is not unreasonable to ask for a class change and even to consider a change of school. Most importantly, the child should know that he has the support of adults and is not at fault for what's happening to him.

Aron: "How do you teach children not to bully one another?"

Edie: Moral education is absolutely essential, but to be effective it needs to happen through modeling and subtle guidance rather than from overt lecturing or even storytelling. Years ago, when I tried preaching at kids, expecting them to make leaps from a story to their own behavior, I got nowhere. During a weekend Girl Scout trip I led, we read Eleanor Estes' book, The Hundred Dresses, about the daughter of a school custodian teased for wearing the same dress every day. The girl tells the other kids she has 100 beautiful dresses at home, and they torment her, "Tell us more about your dresses!" Finally, she can't take it, and her father removes her from the school. Many of her classmates are disturbed to realize what they've done, among them a girl who hardly participated in the teasing but did not stand up to the school ringleader.

During our discussion about the book, all of the scouts said they identified with the girl who felt badly about not speaking up. But afterwards, the popular girls acted just as nastily as before to one of the other kids! They later told me that the girl in the story "didn't do anything" to deserve that treatment, but the real girl was "annoying" them.

Edie: I pulled each of the girls aside individually. "Look," I said, "I don't want to embarrass you, I know you don't want to be mean, but your actions are hurting another person who has as much right as you do to have a good time at this event. If you feel annoyed by someone, find a way to handle it so that the other person doesn't feel so badly that she doesn't want to come back." I realized, however, with some sadness, that the child who was being teased was different from the others (among children and adolescents, difference often stirs anxiety that can lead to exclusion) and less socially adept. The best I could do was pair her with another girl who had been somewhat marginalized so that each girl had a friend. I also let everyone know that teasing was strictly forbidden. My approach did diminish overt teasing (and, indeed, studies show that it can be more effective than promoting empathy).

Dale: Getting the girl to identify with the child she's hurt can sometimes help. You can say: "You must have felt awful to speak like that to another person. What's going on with you? How do you think she's feeling?"

Dale: Many children model what their parents do. If you admonish a child for demeaning behavior, you may also be rebuking her parents. She will naturally defend herself - and her parents. It's better to try to understand what the child is feeling, give her a choice of alternative behaviors in response to those feelings, and reinforce the teaching of socially appropriate behavior in different contexts.

It is also appropriate to "label" the offending behavior as hurtful and unacceptable, saying, "It is not okay to speak to someone in our group that way. If you are upset about something she did, talk with her in a way to work it out."

Edie: Adults often make the mistake of being overprotective. Let's say Susanna's hearing aid whistles in Hebrew school, the class clown remarks, "Who put the tea on?" and the class erupts in laughter. If the teacher admonishes the joker by saying, "We don't make fun, we don't put stumbling blocks in front of the blind or tease people with disabilities - go to the principal's office!" and invites Susanna to sit next to her, she has compounded the problem by embarrassing and further isolating the victim. If, instead, the teachers says, "True, the hearing aid is whistling like a tea kettle," and (if she knows Susanna will respond favorably) asks Susanna to explain to the class why this happens, she might be able to diffuse the entire situation. This approach is no different from handling a tactless remark at a dinner party. The host would not vilify the person by saying, "Get out!"; someone would move the conversation to a neutral topic. The goal is to transform the situation so that both the joker and the person at the butt of the joke maintain dignity.

Aron: "What if a troublemaker sends nasty emails to everyone in the religious school class?"

Edie: It would be best if the teacher spoke to the offender privately, perhaps saying, "I very much want you to be part of our community, but we have got to get this emailing behavior under control - our congregation has to be a safe place for you and everyone else. You know you are going to end up in trouble for doing this, the kids getting the messages feel bad, and later you will feel bad and get a bad reputation. Before you can return to class, we have to figure out how to help you stop." Sometimes a period of separation is required before the person can rejoin the community. In a sense, that's what happens in the biblical story of Miriam and Moses. After Miriam speaks ill of Moses, she is afflicted with a leprosy-like condition. Moses' first response is, "God, please heal her" (Numbers 12:13). The text tells us that Miriam is sent outside the camp for awhile, and the Israelites do not move on until she has recovered and rejoins them. In other words, Miriam was no less valuable to the community than before her error - a reminder to us all that no one should be left behind.