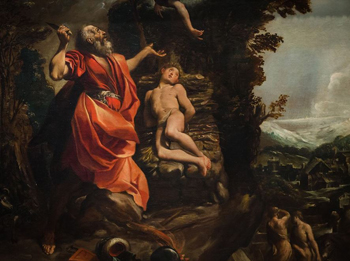 Each Rosh HaShanah, the Akedah ("The Binding of Isaac"), Abraham's near sacrifice of his son Isaac at God's behest, highlights for us the impenetrable paradox of affirming a good, omnipotent God who causes bad things to happen to good people. How could God promise to make Abraham's descendants as numerous as the stars of the heavens, and then order Abraham to "Take your son…and go to the land of Moriah and offer him there as a burnt offering…"? (Gen 22:2)

Which of these 10 possible explanations of this troubling narrative resonates with you?

1. The End of Child Sacrifice

Perhaps the most common explanation to consider—although most scholars have rejected it for lack of a specific biblical or rabbinic pronouncement against the practice—is that the Akedah episode serves as a case against child sacrifice, a rite that was practiced in biblical times.

2. God, Not Abraham, is Tested

Medieval commentator Nachmanides suggests that in going along with God's demand, Abraham is waiting to see how God will fulfill the promise to make Abraham's seed numerous. Rabbi Isaac of Vorki, a 19th-century Hasid, imagines Abraham saying: "I am obligated to follow God's command. The outcome is not my problem, but God's."

3. We Do Not Own Our Children

"All things pass, all that lives must die. All that we prize is but lent to us; and the time comes when we must surrender it" (Union Prayer Book). At times life hangs by a thread; what we treasure can disappear in a moment. In the Akedah, Isaac is not sacrificed, but not every child in our sacred literature is spared.

Genesis Rabbah (56:8) records a mistranslation of Genesis 22:12. In this Midrash, God rebukes Abraham: "When I told you to bring Isaac for a sacrifice, I wanted him at (Hebrew=el) my altar, not on (Hebrew=al) it. Furthermore, Abraham is chided for misunderstanding the Hebrew ha-ahlayhu, which should have been interpreted as "bring him up" and not "offer him up." Accordingly, God called upon Abraham to take Isaac up the mountain and to prepare a burnt offering, not to offer him as the burnt offering: "When I told you, 'Take your son…,' I was not changing My promise that you would have descendants through Isaac. I did not tell you to slaughter him but rather to take him to the top of the mountain. You have taken him up; now take him down again."

With few exceptions, rabbis have commended Abraham for not questioning God's command. The Danish philosopher Søren Kierkegaard expresses a similar view in his book Fear and Trembling. Calling Abraham "a knight of faith," Kierkegaard argues that obedience to God is a human being's highest duty, regardless of the consequences.

Rabbi Burton Visotzky suggests that Abraham's flat affect as he walks like a zombie toward Mt. Moriah indicates he was suffering from depression. Afterwards, Abraham lives in isolation, without further contact with Isaac or Sarah.

What greater test of Abraham's faith could there be than the sacrifice of one's own child. Bible scholar Nahum Sarna notes that it would have been far easier for Abraham to have sacrificed himself in order to save his son, especially knowing that the divine promise of multiple descendants would be fulfilled.

Some commentators suggest that the Akedah is retribution for Abraham's not defending his concubine Hagar from Sarah's abuse, and for acceding to the banishment of Hagar and Ishamel (the son Abraham had with her) into the wilderness without adequate provisions.

The Akedah illustrates the societal need to channel socially unacceptable, inherently violent human thoughts into more acceptable behavior. In this story, a ram is substituted for a vulnerable child.

Living with uncertainty and acknowledging the unknowable are signs of true religious maturity. The Akedah tested Abraham's ability to live with the ultimate paradox: knowing that "knowing" is not the highest level of attainment and that true perfection is being comfortable with "not knowing."

Stephen S. Pearce, PhD, rabbi emeritus of Congregation Emanu-El of San Francisco, is author of Flash of Insight: Metaphor and Narrative in Therapy and co-author with Bishop William E. Swing and Father John P. Schlegel of Building Wisdom's House: A Book of Values for Our Time.

Which explanation, or another, speaks to you, and why? Share your insights and stories below.