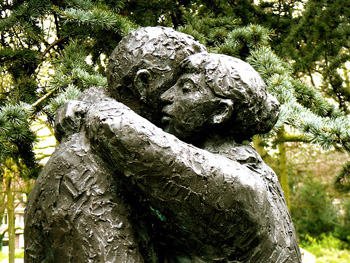 It is very hard to say you are sorry – and even harder to really mean it. It is not any easier to truly forgive. A painful abyss exists between the offender and the offended – an alienated world in which each side must deal alone with their own perception of an unfortunate encounter. And the graver the injury, the more acute the need for forgiveness. If we do not take responsibility for our misdeeds, we obviate their moral significance.

As we approach the Day of Atonement, we can take three paths to forgiveness: focusing on the injured, on the injurer, or-ideally and most challenging-on the relationship between them.

Sometimes we no longer have the opportunity for meaningful, heartfelt communication with a person who hurt us. In such a case, what are we to do with our hurt feelings? Considering this troubling issue, the 16th-century Safed kabbalists added a paragraph at the beginning of the Bedtime Sh'ma (a prayer recited just before going to sleep) which declares unconditional forgiveness for all those who may have hurt us:

I hereby forgive anyone
who angered or annoyed me
or who sinned against me,
whether against my body, my property,
my honor, or anything of mine;
whether they did so unwillingly,
willfully, carelessly, or deliberately;
whether through speech or action...
And may no one be punished
on my account.

When we pardon a priori all those who caused us physical, emotional, or financial harm, without their having to express remorse or even know that they have hurt us, ours is a generous act that can facilitate our peace of mind. But without a true dialogue, it is incomplete.

We may have also experienced the mental anguish of being unable to communicate with someone we hurt, because that person is no longer alive or because s/he chooses not to be in a forgiving relationship with us. Friends may advise us, in such a case, to forgive ourselves, saying that no good comes out of self-flagellation, but in Judaism, feeling remorse and sorrow for the hurt we have caused another is not enough. In order for your forgiveness to count and be deemed meaningful, the hurt party must forgive you. Even God Almighty cannot forgive a transgression against a fellow human being. The Mishnah states that Yom Kippur is effective "only if one has appeased one's fellow" (Yoma 8:9). Maimonides adds: "Even though one has made compensation, the offender must also appease the one he has injured and ask his forgiveness. Even if a person only annoyed another with words, he has to pacify the latter and entreat him until he has obtained his forgiveness" (Hilkhot T'shuvah 2:10). In a way, an offended individual stands between you and God. In order to be able to address the Divine, you need first to properly address the injured party. However, even if we aren't given the opportunity to enter into dialogue with a person we hurt, we can nonetheless incorporate our feeling of remorse into a new commitment to becoming a person of greater truth and honesty, actively striving to bring blessings to our world. As the Kotzker Rebbe purportedly said: "There is nothing more complete than a broken heart." Sometimes our very brokenness can lead us to tikkun (repairing and mending).

In his song "Al Tifchad" ("Don't Be Afraid"), the Israeli singer Ehud Bannai declares: "So believe that if you've ruined something, you can also mend it." That, however, can be difficult, especially if the breach is serious.

The Israeli philosophy professor Yotam Benziman argues (in Forgive and Not Forget: The Ethics of Forgiveness) that the proper and only way to mend an injury is through "dialogic forgiveness." Both the offender and the offended carry the memory of the injustice. For forgiveness to occur, they must integrate it into their life fabric, and grow from this painful place. Rather than putting the hurtful act "behind us," or separating the deed from the doer by condemning the action but acquitting its perpetrator, or leaving the act unowned (as if what a dear one did was wrong, but she is still the same loving person), Benziman proposes a forgiveness process based upon remembering it.

In order, for example, for a couple to resolve a marital crisis upon the wife's admission that she was having an affair, the husband and wife need to engage in an honest dialogue about what went wrong, Benziman says. The wife might explain to her husband how lonely she felt when he spent long hours at work and was inattentive to her need for emotional support. She would acknowledge the hurt caused by her infidelity and admit that she was wrong to seek warmth and comfort elsewhere instead of discussing how she was feeling with her husband. She would ask for forgiveness and commit herself to mending their relationship. For his part, the husband would tell his wife his side of the story-how he feels about what happened, what his needs were, what he expects from their relationship. The wife needs to take responsibility for her offense, and the husband needs to agree to relate to her as an individual who chose to do wrong and now chooses to atone for it, making the effort to repair the broken relationship. Others may assist in the process, but the two parties, together, carry the burden of the healing.

That said, both individuals here are not equally culpable. The offender needs to recognize that her infidelity is at the core of the couple's pain. She cannot forgive herself; she's dependent on her husband to forgive her. One cannot force forgiveness; one can only ask for it.

Mutual commitment to the relationship builds a bridge, fragile and tentative as it may be, over the abyss separating the two. It is its own act of creation, recalling Genesis 1:2: "The spirit of God hovered over the face of the waters."

In a sense, God is the third partner in the complex relationship between offender and forgiver. Over those who truly seek justice and forgiveness, the Divine Presence hovers. Our relationships matter because there is an intrinsic kedushah (sanctity) in them.

Imagine how we might interact with others if we took care to remember that our relationships involve the Divine.

Dalia Marx is an assistant professor of Liturgy and Midrash at HUC-JIR's Jerusalem campus.