Celebrating an Historic Rosh Chodesh with Women of the Wall 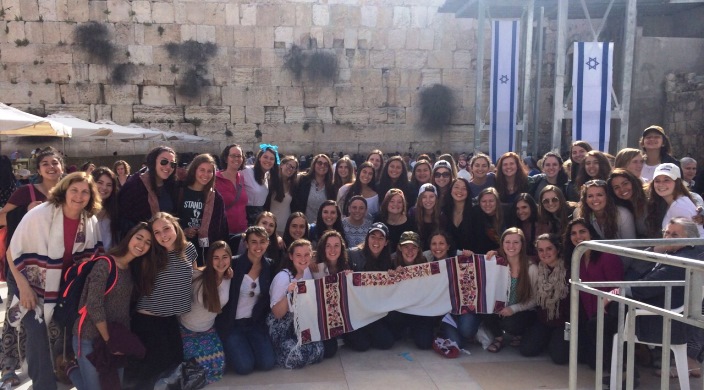 I woke up bright and early on Monday morning to head to the Western Wall with my students, participants in the NFTY-EIE study abroad program in Israel. At 7:00 a.m. sharp (OK, maybe we were a few minutes late…), we joined Women of the Wall for prayer services in honor of Rosh Chodesh, which marks the beginning of the new month of the Jewish calendar. We were tired and hungry, but also curious and enthusiastic – and we had no idea of the excitement that lay ahead.

Our group was honored to join Women of the Wall and the close-knit k’hilah (community) they have created by praying together every Rosh Chodesh. Though our students had already joined them once during our semester abroad, for their Purim Megillah reading, something felt different this time.

Our female participants spread out among the women, who were a mix of Reform, Conservative, Modern Orthodox, and unaffiliated. I stood with a group of students near the mechitza, the wall that separates the men's side and women's side of the Wall. Usually, young Orthodox men stand on the other side of the mechitza and sing loudly in an effort to drown out and overshadow the women’s prayers. This time, though, the group on the other side was made up of liberal Jewish men, supporters of the Women of the wall; I recognized a Conservative Israeli rabbi leading their t’filah (prayer).

As the students and I began to pray with the Women of the Wall, I found myself glancing over at the men's side with a bit of jealousy. They were singing with such happiness and pride – and nobody was giving them any trouble for it. Like everyone else on the men's side, they were able to walk up to the ark and come back with a Torah in hand.

During Hallel, the special prayer of praise that we recite on Rosh Chodesh and holidays, Women of the Wall’s director, Anat Hoffman, walked through the group of women and asked us to put our arms around one another’s shoulders during the prayer "Ozi Vezimrat Ya." And then, something incredible happened: As we sang, the door of the mechitza opened and the men on the other side slipped a Torah through to the Women of the Wall.

I was stunned. I couldn’t believe it. There we were, singing and dancing with an actual Torah on the women’s section at the Kotel! It seemed so surreal that I felt as if I were watching the scene from afar. I couldn’t believe the chutzpah of these men and women, who forged ahead to create such a major change in the atmosphere at the Kotel.

Occasionally, Women of the Wall’s prayers incite anger from protestors, and so my first concern was to make sure that things remained calm and that our students were OK. But they were more than okay. In fact, they were ecstatic. I could see the excitement in their eyes as they sensed that they were a part of something big, something important – history in the making

We heard only a few unpleasant comments from the men’s side, and the police stopped an attempt to take back the Torah. After that, our Torah reading began. It was difficult to hear above all the excited buzz, but two of our students, Maya and Jackie, summoned unbelievable confidence and went up to the Torah for an aliyah (the blessing before and after the Torah reading). When we reached the part of the service when the Torah is typically returned to the ark, Anat Hoffman marched through the women’s section with the Torah in her arms, and then she brought it back to the spot in the mechitza from which it had arrived.

At the end of t’filah, it was as if everything went back to normal – but for so many of us, so much felt different. Among the most powerful parts of the services was the singing of “HaTikvah,” Israel’s national anthem, at the conclusion of the service, as the Women of the Wall always do. As we belted out the words about being a free people in our own land, the song seemed to take on an additional meaning, especially with Yom HaAtzmaut (Israel’s Independence Day) only a few days away. May this become a regular occurrence!

Ariella Poni Kronish is the former director of Jewish studies for NFTY-EIE High School in Israel, a Reform study-abroad program.