Fiddler on the Roof and the Joys of Yiddish 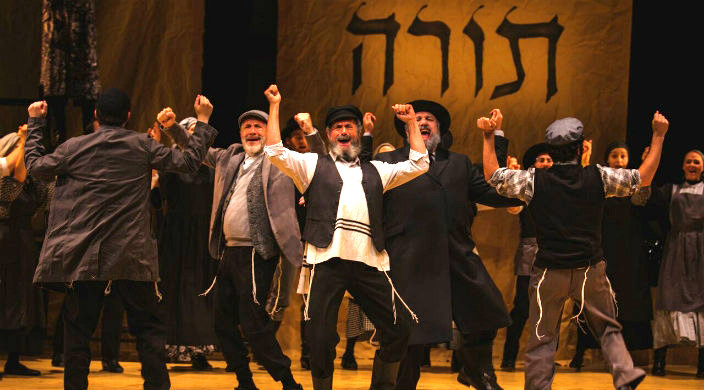 You don’t have to know mamalushen (the mother tongue) to enjoy the hit musical Fidler Afn Dakh in Yiddish. English subtitles are supplied, but getting the tam (flavor) of few key words and colorful expressions will enhance your theatrical experience – and enrich your Jewish vocabulary.

Our guide to Anatevke, a little shtetl (town) on the eve of the Russian revolution (erev der revolutsye), is Tevye der milkhiker (the milkman). He is an oreman  (poor man), who complains to Got (God), also known as Reboyne-shel-oylem (Master of the Universe), about all the tsores (troubles) that befall him, like an injury to his ferdl (little horse) right before Shabbes (the Sabbath).

Like the other yidn fun shtetl (the Jews of the town), Tevye is all too aware that their lives are as precarious as a fidler afun dakh (a fiddler on the roof). The yidn hobn moyre (are afraid) of shreklekhe nayes (horrible news), of der Keyser (the Tsar), of a beyz oyg (an evil eye), of a shtrof fun Got (a punishment from God), all of which could lead to an umglik (a disaster).

And who besides Tevye, di tate (the father), lives in Anatevke?

According to traditsye (tradition), the tate must approve the shidukh (match) before a khosn (groom) and kale (bride) can join under the khupe (wedding canopy) for their khasena (wedding).

Freylekh zol zein (happy it should be) at the simkhe (celebration). After droshe-geshanke (wedding gifts) are presented to Motl and Tsaytl, the tansn (dancing) begins. But when Pestshik begins to tans with Hodl, the question arises: Is it an aveyre (a sin) for a mansparshoyn (a man) and an ishe (a women) to tans together? Having to judge af eyn fus (on one leg), so to speak, der rebe declares: An iser iz dos nit (It is not forbidden.) So much for traditsye!

Following their khasena, the khosn and kale are ready to make their hoyz (house) a heym (home), furnishing it with bebekhes (possessions) like an oyvn (oven), a top (a pot), a fan (a pan), a barsht (a broom), a bank (a bench), and a hook to hang a hitl (a hat).

Visitors say Gutn-tog (a good day), and when they leave, Got iz mit dir (God be with you) or Zay gezunt (be well). If a guest is shlekht (bad), he or she may be told, Gey aheym (Go home).

Here are some of my favorite Tevyeisms:

Fidler Afn Dakh, a production of the National Yiddish Theatre Folksbiene directed by Joel Grey, opens for a limited engagement at Stage 42 in Manhattan on February 11.

END_OF_DOCUMENT_TOKEN_TO_BE_REPLACED

Just a month after it was announced that the Israeli star Shira Haas would portray Meir in a TV series, The Hollywood Reporter revealed this week that Oscar winner Helen Mirren would portray Israel’s only female prime minister in an upcoming biopic.
Yiddish
Image

Growing up, Aaron Bendich would spend lots of time with his grandfather Max in the
View More